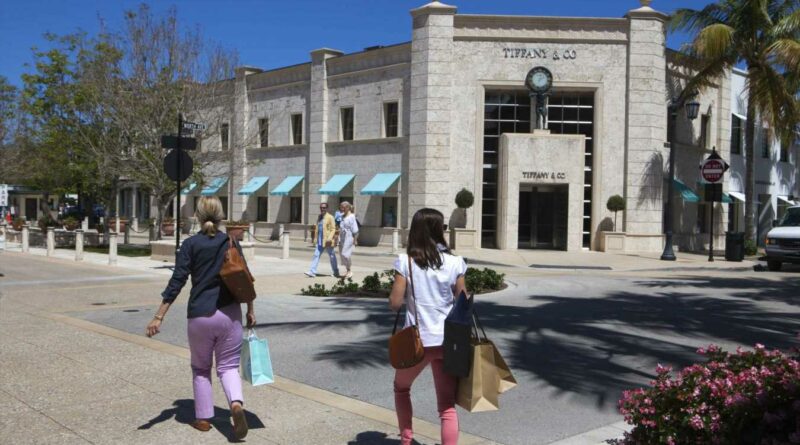 WEST PALM BEACH, Fla. — Retailers, restaurants and other business owners want to be where the people are. And people are moving to South Florida in droves.

Some are taking a temporary retreat during the Covid pandemic, away from the cold weather up North. Others are making a longer-term change, and businesses are following by committing to decadeslong leases.

Lucid Motors, an electric car company known as a Tesla competitor, opened its second South Florida location last month at Rosemary Square, which is operated by New York-based developer Related Cos. It joined Lululemon, Anthropologie, Yeti, Tommy Bahama, Sur la Table, RH and more than a dozen other retailers that, on most weekends, are filled with visitors. After shopping some grab a smoothie from Pura Vida, another recent addition to the complex, and listen to live music on a central grass lawn.

Across the water, on Palm Beach Island, the activity around Worth Avenue is similarly bustling.

SoulCycle is running an outdoor pop-up. Its spin classes book up on the weekends and are frequented by out-of-towners, who are often overheard discussing their plans to go back to New York or Washington, D.C. — eventually.

On Worth Avenue, a Rolls Royce lines up behind an Aston Martin behind a Porsche, as couples dip in and out of Tiffany, Chanel and Saks Fifth Avenue on a cloudless and balmy Saturday afternoon. The upscale shopping street, what some might call the Fifth Avenue of the South, has hardly any vacancies. The notable exception is an empty Neiman Marcus shop that the luxe department store chain closed after it filed for bankruptcy last year.

Some business owners have had their decisions shaped by the pandemic, and have opted for Worth Avenue over Fifth Avenue.

Maurice Moradof and his mother Yafa Moradof fled Manhattan last November to make a long-term bet and open their second high-end jewelry shop, Yafa Signed Jewels, on Worth Avenue. They made the move after a wave of looting and riots tied to the George Floyd protests took place in Manhattan during the summer. Businesses along New York City's high streets were taking a steep hit due to Covid restrictions, the loss of tourists and a pullback in consumer spending.

"The business was getting a little weak," Maurice Moradof said about the Fifth Avenue location, which is still open as a studio. "And it became very dangerous in New York City. I didn't feel comfortable anymore."

Since opening on Worth Avenue, business has exceeded expectations, he said. The retailer signed a 25-year lease on the store, he said, which sits nestled between a Lilly Pulitzer and Michael Kors.

"There's no recession going on in Palm Beach. … The rich are getting richer," Maurice Moradof said. "I don't see New York coming back for at least another two or three years."

The activity in the South Florida real estate market — towering cranes, the arrival of new tenants, escalating rents and few vacancies — paints a considerably different picture than the streets of SoHo and Fifth Avenue in New York City. And experts say real estate in the Palm Beach market, in particular, is more and more sought after.

Some Wall Street financial institutions have made the leap, too, citing the tax and lifestyle perks for their decisions. Goldman Sachs is reportedly eyeing the Palm Beach market for new office space, while Paul Singer's Elliott Management has moved its headquarters to West Palm Beach from midtown Manhattan.

According to Redfin, a tech-based real estate brokerage, 56.1% of home searches for Palm Beach County during the fourth quarter came from outside the area. Searches coming from Chicago and Brooklyn, New York, were the most popular out-of-state origins, the firm said.

"Everything that's going on in Palm Beach and in the surrounding downtown West Palm, it's a great story," he said. "And one of the big catalysts, I think, was what Rosemary Square has done attracting new customers."

Even some internet-first brands are looking to test the waters in West Palm, at Related's development, which used to be known as CityPlace until a marketing overhaul in early 2019.

Three businesses — Faherty, a men's and women's apparel retailer; Solid & Striped, a swimwear brand; and Mint & Rose, a shoe and accessories company that brings products from Spain — opened up pop-up locations at Rosemary Square earlier this year. And they're all operated by Leap, a business that helps online retailers find spaces, sign leases and open stores.

"This is a great example of a market that's going to thrive," said Amish Tolia, co-founder and co-chief executive of Leap. "Rosemary Square does pull from multiple different trade areas … and we believe it's only going to get better from here."

"Based on what we're seeing," Toila said, "we fully intend to do more in Southern Florida."

What Toila and many other real estate developers see is an influx of people looking to make Palm Beach and surrounding neighborhoods home. The comfortable climate and escape from high taxes have long been draws, even before the pandemic. But especially now.

There were 289 single-family transactions in Palm Beach in 2020, up 122% from the prior year, according to a report by real estate agent Suzanne Frisbie at the luxury firm Premier Estate Properties. The year ended "with often-staggering, record-breaking highs," she said, that are spilling over into 2021.

Private equity tycoon Scott Shleifer reportedly just closed on an oceanfront mansion in Palm Beach, paying more than $120 million and setting a record for residential sales in Florida and marking one of the most expensive home sales in the nation.

Houses are flying off the market, and booming construction for other residential space is a sign that supply remains constrained. Related, for example, is still plotting a pair of high-profile rental communities. One will sit at the site of an old Macy's department store near Rosemary Square. It has also sped up construction of a 20-story office tower, also next to Rosemary Square, as the pandemic drove demand that few could have predicted.

Retail rents on the rise

"Twenty-five years ago, West Palm Beach, as you could imagine, was a very different place with a lot of seasonality," said Gopal Rajegowda, a partner at Related's Southeast office. "But the market started to mature. And, effectively, it's started to look and feel like a real city."

"We see the quality and the caliber of people increasing, and a lot of that is being driven by people moving down here from the Northeast and the Midwest," he said. "Now, we think Covid is really accelerating the growth in the maturity of the market."

As demand ticks up and more retailers and restaurants move into the area, commercial real estate rents in the South Florida market have picked up, too.

"It's just not as bad of a story here, as it is in many other parts of the country," said Marty Arrivo, founder and CEO of Acre, a property consultancy that's been helping lease space around South Florida.

"San Francisco's a disaster, Los Angeles is a disaster, New York is a disaster, Chicago is freezing," he said. "Now all of a sudden, relatively speaking, all of all these global brands are turning to South Florida and going, 'It's open for business, the weather's nice' — we've got to be focusing if we weren't already focusing here. We've got to be doubling down.'"

Macy's to close 125 stores in the next three years