“Pressure, pressure, pressure,” the Cowboys owner and general manager told a handful of reporters in the bowels of the Star late Thursday night. “Same kind of thought you’d have if you were looking at the best outside pass rusher.

Leave it to the Cowboys owner to find the perfect spin.

The Cowboys found a way to explain why Penn State linebacker Micah Parsons offers them great value with the 12th overall pick, the combination of a space tackler and pass rusher bettering a defense that ranked second to worst against the run in 2020. Parsons’ 4.39-second 40-yard dash at his pro day projects well for a defense that sought speed to join its length. Defensive coordinator Dan Quinn, building off his Seattle Legion of Boom days and run as Falcons head coach, will scheme creatively to maximize Parsons’ upside.

And yet, the Cowboys will just barely acknowledge: The prospects among whom they hoped and felt fairly confident they could celebrate with the 10th overall pick were snatched just before them. Seven selections into the NFL draft, every defender remained available. There was reason for pause when the Carolina Panthers selected South Carolina cornerback Jaycee Horn at 8, but Alabama’s Patrick Surtain II was no mere consolation prize.

NFL DRAFT TRACKER: Analysis on every pick in the first round

MORE: Team-by-team look at all 259 selections

FIRST ROUND: Patriots, Steelers selections among 10 most intriguing picks 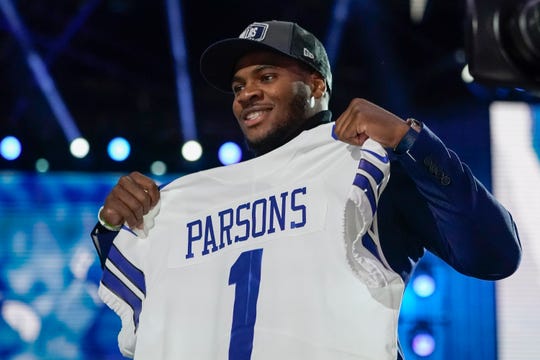 Keep city as white ‘as much as possible,’ council candidate says, stunning forum in Michigan