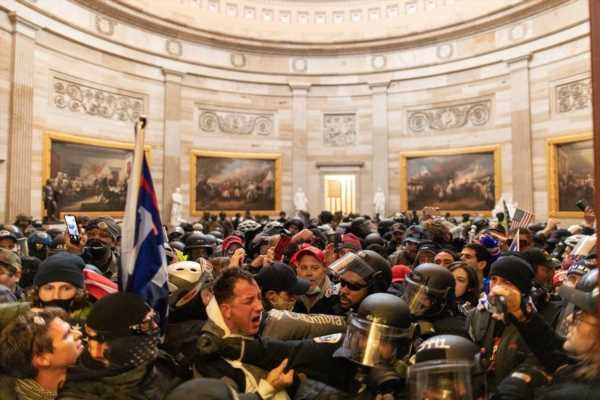 The world watched in shock as an unruly mob of President Donald Trump’s supporters stormed the U.S. Capitol on Jan. 6 in an effort to overturn the results of the presidential election. The inability of the U.S. Capitol Police to stop the riot led to a catastrophic breach in national security and a reckoning over law enforcement in Washington, D.C.

Horrified onlookers could not help but notice the striking contrast between the police response to Trump’s insurrection and the hard fist that met Black Lives Matter protests in June. During largely peaceful protests on June 1, D.C. police officers arrested 289 people, with federal officers tear-gassing demonstrators in Lafayette Square to clear the way for Trump’s infamous Bible photo-op at St. John’s Episcopal Church. By comparison, local police in Washington, D.C., who secured the Capitol grounds on Wednesday and enforced the 6 p.m. citywide curfew have made only 68 arrests as of Thursday morning.

Other scenes illustrated the chasm in the police response: A TikTok clip appeared to show Capitol Policeopening barricades for pro-Trump agitators. One officer in riot gearhelped a Trump supporter down the steps. Even as police fired tear gas and flash grenades into the churning crowd, others gave departing Trump supporters directions to their cars or hotels. This reporter overheard a Capitol Police officer apologize, unprompted, to would-be insurrectionists as they left the still-chaotic scene at the Capitol grounds: “Sorry about all of this. Thanks for your patience.”

Steve A. Sund, chief of the United States Capitol Police, said in a statement that his officersresponded valiantly. “The violent attack on the U.S. Capitol was unlike any I have ever experienced in my 30 years in law enforcement here in Washington, D.C.” said Sund.  “The actions of the USCP officers were heroic given the situation they faced.”

One viral photo seemed to crystallize the comparison between the police response to Black Lives Matter protests in 2020 and the pro-Trump insurrection in 2021. It shows steely looking military police in fatigues and armor preparing to hold the line during the BLM rally.

Most of the people who shared it yesterday got the details wrong — the photo shows the National Guard lined up on the steps of the Lincoln Memorial, not the Capitol — but this viral critique isn’t exactly incorrect: It still gets at a glaring disparity in the federal law enforcement response then and now.

When racial justice protests erupted around the country in June, the federal governmentmade awesome preparations for local protests. Then-Attorney General Bill Barr mobilized unmarked military police and federal law enforcement units to secure D.C. streets, while then-Secretary of Defense Mark Esper asked Ohio, Maryland, Indiana and other states to send National Guard units to lock down the city. “The sooner you mass and dominate the battlespace, the quicker this dissipates,” Esper said during a conference call with state governors, describing peaceful protests in public squares. Barr eventually expanded his program to include other “anarchist jurisdictions.” The show of force on June 2 — the day the photo was taken at the Lincoln Memorial — prompted concerns from some military and local officials that the government had violated thePosse Comitatus Act and even theThird Amendment.

“Who thought what America needs now is a viral image of the American military in camouflage and body armor occupying a memorial that symbolizes the hope of reconciliation, that has drawn to its steps Marian Anderson to sing for a mixed-race crowd during a time of segregation and Martin Luther King to proclaim ‘I have a dream,’ and millions of nameless souls, of all races, who believe there is some meaning in words like ‘the better angels of our nature’?” wrote critic Philip Kennicott,dissecting the jarring Lincoln Memorial image for The Washington Post.

Ahead of the long-planned rallies by the Proud Boys and Trump supporters, those same precautions were not taken. The Capitol Policefailed to anticipate the size and energy of the crowds, and the Pentagon pointedly sidelined the D.C. National Guard as well, “to avoid the poor optics of uniformed military personnel and Humvees once again returning to the streets of D.C.” the Washington Post reported. But those concerns over optics only materialized after Barr hammered cities such as Chicago, Seattle, and Portland, Oregon, with preemptive law enforcement actions against the wishes of local and state leaders — and in the service of Trump’s order toprotect statues and monuments.

While the Department of Homeland Security reportedlyauthorized sweeping intelligence measures to protect monuments, federal authorities apparently did not see the Proud Boys as the same threat category as art vandals. D.C.’s experience with the far-right group should have proved otherwise: In November, a Proud Boys rally led toviolent clashes and arrests, and during their December gathering, Proud Boys membersdestroyed the property of historically Black churches in the city.

At a briefing on Thursday, MPD Chief Contee defended his department’s response. “There was no intelligence that suggested that there would be a breach of the U.S. Capitol,” he said.

The fact that the mob of Trump supporters was largely white likely played a major role in the disparate enforcement approaches, says Chris Burbank, vice president of law enforcement strategy for the Center for Policing Equity, a research center based at Yale University. “There is a different response to Black and Brown people than there is to white people in policing,” he says. “Having lived through that experience for 25 years in my life, having seen it and studied it for the last 6, 7 years, there is a tremendous disparity in how we treat people and what we as the people believe should be done with different groups when race is involved.”

In addition, the Jan. 6 event had been explicitly summoned by President Trump. “This was the United States who encouraged the groups to go do this. How does that play in to the Capitol Police response, to the FBI response, to the MPD response, when it’s the president who said go do this?” Burbank says. “I’m more disappointed in that leadership perspective than anything else, but without a doubt there was a noticeably different response, and it was felt throughout Black America.”

On Wednesday, D.C.’s Metropolitan Police Department led the effort to retake the Capitol building, along with Capitol Police and with support from more than 18 local, state and federal agencies, including officers from Maryland and Virginia. The National Guard arrived, eventually, providing a backstop to other law enforcement agencies.

Perhaps the most striking disparity between the two events was the response from the White House. In June, Trump was eager to use the Insurrection Act to deploy some 10,000 troops to Washington and other cities to suppress Black Lives Matter demonstrations. Yesterday, when an actual insurrection arrived, his message was different. To the rioters ransacking the Capitol, ina video message since deleted by Twitter and Facebook, Trump said, “I love you.”

— With assistance by Sarah Holder

Real or fake trees: Which is more green?