Home » Business » The future of Ralph Lauren's iconic polo, and retail, may be coloring your own clothes in the store

If the colors that apparel retailers choose for their latest lines often aren't to your liking, or by the time they hit the store shelves seem behind the latest trends on the sidewalks or on social media, a solution may be coming sooner than you imagined.

By next year, Ralph Lauren flagship stores may have the textile coloring technology to let shoppers have the blank slate of cotton polo shirt dyed in-store.

Chemicals giant Dow, a major player in textile dyes, has been working with Ralph Lauren on new processes for cotton dyeing that reduce use of chemicals, water and energy intensity.

"Ralph Lauren obviously is a big user of cotton and to dye textiles, it takes a lot of chemicals and a lot of water and you generate a lot of waste and mainly you do that because you're trying to use heat and pressure to put that dye into the fabric," Dow CEO Jim Fitterling said last Thursday at the CNBC ESG Impact summit.

Trillions of liters of water, for example, are used for fabric dyeing, which is equal to 20% of the world's wastewater.

That is one of the reasons Dow developed what it calls ECOFAST Pure, announced earlier this year, which to dye cotton needs up to 90% less chemicals, 50% less energy and 50% less water.

But the sustainability project could also have major implications for what is called experiential retail — the effort by retailers to give consumers new reasons to come into stores as e-commerce's footprint, already large, only grows as a result of the pandemic.

Ralph Lauren's Color on Demand project uses the Dow technology to color cotton at any point in manufacturing, and result in shorter lead times for making color decisions. Halide Alagöz, chief product and sustainability officer at Ralph Lauren, said in an announcement about the effort earlier this year that the retailer will be able to "meet personalized consumer demands faster than ever before."

And while he didn't say it, that means potentially coloring a shirt in the store.

"Ralph Lauren will be able to do something like put Color on Demand in one of their flagship stores in New York next year so that you can go in and get your Ralph Lauren polo dyed in the store," Fitterling said at the CNBC ESG Impact event. "That would have never been possible without this technology."

A Ralph Lauren spokeswoman said, "We look forward to sharing more about this in due course."

The post-pandemic era of experiential retail

Coming up with new strategies to more deeply involve the consumer in the apparel production experience is not new for Ralph Lauren. It has allowed shoppers to customize colors for its iconic horse logo sewn into shirts for apparel ordered online. Other retailers, such as North Face, have been letting consumers pick and choose the components of jackets and have their preferences manufactured into the whole.

Customization and faster fashion that embeds the individual consumer in the shopping narrative is going to play out in many ways in the retail sector. Levi Strauss & Co. CEO Chip Bergh has said the traditional sizes will be a thing of the past in fashion as 3-D body scanners and camera technology, combined with much faster manufacturing, will allow retailers to make clothes a unique fit for each person. Nike and Amazon both have made body-scanning technology acquisitions in recent years.

Pre-pandemic every conversation in retail was about selling experiences over things, and while the lockdowns may have put much that had been in the works on pause as digital became the only way to do business, those strategies will now come back into focus.

"E-commerce has gained points of penetration and mindshare and will not give it back," said Simeon Siegel, retail analyst at BMO Capital Markets. "But strong stores that made it through the pandemic are even stronger and are not likely to go away."

That means an increasing blend of e-commerce and experiential stores, especially for high-profile locations. "The store will become more experiential each and every day," Siegel said. "The trick is how to capitalize on it to sell more things."

Allowing a consumer to choose a color and have a piece of apparel dyed in a store could help to create the type of emotional attachment tied to a purchase that is key to retail's future.

"People want to get back out after the pandemic," said Ivan Feinseth, chief investment officer and director of research at Tigress Financial Partners. "Lots of ideas got shelved because of the pandemic but will come back. A good portion of retail still takes place in a store" he said.

Customization and rapid production of apparel that allows consumers to choose color is an interesting development because the process of fabric preparation has historically been toxic and only able to be done by workers wearing protection in plant settings.

"The chemicals to dye stuff, the whole handling of how companies get rid of stuff … you don't take excess dye and dump it in a sink," he said, though he added that removal of chemicals from many products, such as cleaning products, is becoming much more common.

Dow declined to elaborate on its CEO's comments.

Ralph Lauren said in its official announcement that the goal is the world's first "scalable zero wastewater cotton dyeing system," and the first phase which will be in use with traditional dyeing equipment will use up to 85% less chemicals. By 2025, it aims to use the Color on Demand platform in more than 80% of solid cotton products.

The companies also announced earlier this month that they are open-sourcing the dyeing process for the textile industry.

"The sky is the limit to what consumers can order and receive," said Ken Butts, global key account manager at Datacolor, which works with retailers on the implementation of digital color solutions for their supply chains. That has been mostly limited to online companies doing it for DIY crafters, and for patterns rather than solid colors on fabrics including upholstery or curtains, though it is moving into apparel, too. "We're seeing companies investing in their own digital printers or print samples and the next step is printing directly for consumers," he said.

Digital printing is able to respond to consumer interest and demand quickly, but it will not replace traditional dyeing any time soon because, among other factors, there are many fabrics which it still cannot handle.

"It doesn't mean that won't be overcome some day," Butts said, "but your typical polo shirt, it is manufactured first to look like a shirt and then dyed in the form of a shirt. You can't print it, you can't twist it around in there [the printer]."

The traditional approach to dyeing a piece of clothing like a polo shirt requires an intensive process with hundreds of gallons of pigment and a significant amount of large-scale machinery which would never be feasible for a store setting, but even in industrial textile facilities, there are smaller machines used to test color samples.

"Anywhere in the world you find a factory dyeing fabrics on large-scale equipment, thousands of pounds at a time, they will have a similar piece in the lab on a small scale and that's where the manufacturer is testing their ability to make a specific color," Butts said. "The first step for a supplier when a retailer asks for a new color is to test it on smaller equipment."

The smaller equipment still requires chemicals and water and the end of the process will include waste disposal issues, but as technology improves it is not unreasonable to foresee a future in which retailers can dye fabric in-store, especially larger, flagship-style stores where space is not constrained.

Customers may be able to come into a store and pick a color from a palette, or maybe even bring in a color with them, and software will be able to translate that into the dyes required. But timing will be an issue for an in-store revolution in color-dyeing. Chemical dyeing, even at its most efficient, can still take as long as an hour to produce the final garment. But for both consumer and retailer that might still be better than the current process.

"Now designers are choosing a palette that will appear in a store six to nine months from now, summer 2022, and trying to predict consumer trends," Butts said. If retailers get the trend wrong, that may result in a rush process of new manufacturing and transport which has high costs and by the time they get the new units they may still miss trend. "With this, you can respond to current hot trends," he said.

A consumer could come into a store with a color in mind, maybe they saw someone else wearing it, and within a day or two the apparel can be produced and the retailer didn't need to order 10,000 shirts in advance. "Dying fabrics to customer preferences is really exciting," Butts said.

Sustainability and the apparel consumer

Datacolor focuses on translating colors into numerical codes that can be communicated between designers and textile manufacturers in the supply chain, cutting down on the need to ship physical samples back and forth during the design process, and aiding quality control efforts related to making sure the color is correct when it comes time to manufacture thousands of pieces. That is a more efficient approach to apparel production than a designer in one location sending color palettes to dye mills around the world, which then have to send back fabric samples for visual review — "back and forth until the designed finds something they like," Butts said.

But whether it is digital innovation or dyeing innovation, the retail industry has a sustainability issue that will remain challenging to address. Faster communication in the design and manufacturing process, and faster fashion is enticing for shoppers, but a consumer turning over a wardrobe more frequently is not necessarily being more sustainable even if the underlying processes used to produce the piece require less resources and energy. And giving consumers more reason to come into stores — and potentially spend a longer time while waiting for a custom item to be finished, leading to possibly even more purchases — means more consumption.

"You can eliminate all the big pigments in the machines but at the end of all of that you are still left with a garment or fabric," Butts said. "That question still has to be addressed. I like seeing improvements in the coloration process, but we still need to address sustainability from an end-to-end view."

"Let's face it," Siegel said. "In retail, the most sustainable option is to not sell the item in the first place."

Manufacturing that is less harmful and less energy intensive with a lower carbon footprint is a good thing for retailers and brands, but it does not address consumer waste and landfills, which is why retail models are evolving in multiple ways, including the focus on resale and reuse businesses, such as Rent the Runway, which went public last week.

The Ralph Lauren-Dow partnership may be novel in how its sustainability in manufacturing story can lead to a new narrative in experiential retail for the consumer, but no brand has the answer to the bigger question.

"The retailers are in the business of selling more units, but also in the business of improving their sustainability. The question is how to marry those two," Siegel said. "They need to balance a high-wire act of being better without alienating consumers, convincing consumers the best thing is to walk away. And that story is yet to be written."

EU will take own decision on Boeing, says transport chief 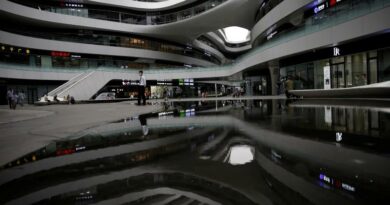