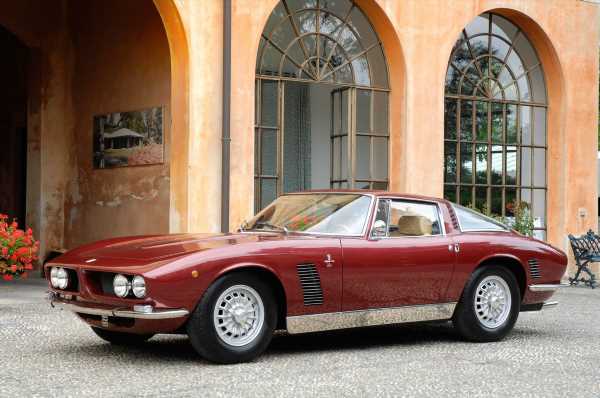 If you want to get a rise out of blue-chip car guys, ask them about Iso Grifo.

“Oh God—they have jumped in value over a handful of Ferraris in the last five years,” Steve Serio tells me on the phone recently, huffing as he shoveled his way through a foot of snow in his driveway in Boston. “You’d spend more for a great Grifo than you would a Ferrari 330 GTC, and really they’re on parity with [Ferrari] Daytonas now.”

In the past two years, Serio,an automotive broker specializing in high-end Porsches and Aston Martins, has facilitated transactions for 10 of them, including a collection he assembled for a private client. “They’re at [Aston Martin] DB5 money,” Serio says, “they’re Ferrari money.” (Meaning: $3 million and more.)

One of the Italian Originals

If you’ve heard of Bizzarrini, you may have heard of Iso Grifo. (If you don’t remember Bizzarrini,here’s a primer on the vintage ones and a look at theplans for a new one.)

Both are extremely obscure Italian car brands linked to Giotto Bizzarrini, who along with his own eponymous line developed cars for Alfa Romeo and Lamborghini, among others, after walking out on his day job with Ferrari in 1961. (This may have been Ferrari’s loss: Bizzarrini designed what may be the most collectible car in the world, the Ferrari 250 GTO.)

At any rate, and fortunately for vintage exotic enthusiasts today, Bizzarrini designed the chassis for what became the Iso Grifo, too.

First shown as a 1963 prototype at the Turin Motor Show, Iso Grifos were produced until 1974, with just over 400 built in total. The cars were Renzo Rivolta’s attempt to combine Italian style with American power to make the ultimate grand-touring machine. He built them with V8 engines and four-speed (later five-speed) manual gearboxes sourced from the Chevrolet Corvette (and later, Ford) to ensure performance and reliability, a move that downgraded the cars in the eyes of purists but ultimately made them stronger.

Rivolta came to the project after years of building everything from refrigerators to scooters to the charming Isetta bubble cars that BMW later produced. It was from that deal with BMW that he earned enough money to build his first grand touring, or GT, car. The resulting Iso Rivolta was a four-seat coupe with a svelte Bertone body by yet another great Italian car guy, Giorgio Giugiaro, who developed myriad iconic cars for Alfa Romeo, Maserati,De Tomaso, Lamborghini, Ferrari, and Lancia. The sportier two-seat Iso Grifo followed in 1965.

In 2020, according to Hagerty data, a concours-quality Iso Grifo GL is worth somewhere between those prices—$487,000 in average values—and you won’t find one in fair condition for less than $300,000.

The surge in popularity is part of the larger trend of collectible and classic carsdoing exceptionally well during the coronavirus pandemic. But it’s also singular. In the past three years, values of Iso Grifo cars have risen nearly 10%, according to Hagerty, and they are expected to keep climbing.

“Fans of the purebred Italian marques such as Ferrari, Maserati, and Lamborghini were [historically] turned off by the engine, while fans of American V8s struggled with the hard-to-find Italian parts,” says John Wiley, manager of Valuation Analytics at Hagerty. “However, their excellent power-to-weight ratio and stunning low-line looks are drawing fans as engine swaps and swoopy supercars become popular again. Enthusiasts of all kinds are waking up to the marque.”

Chuck Wray, who works exclusively on such Italian exotics as Bizzarrinis and Iso Grifos at his restoration shop in Virginia, says business this year is up more than 300%.

“It has been quite a big push,” says Wray, who has owned an Iso Grifo since 1987. “People are spending serious money to restore them correctly, which was never an option before for those cars. It’s funny. I think it’s easier now to sell an Iso Grifo than to sell a mid-60s vintage Ferrari—and certainly [easier] than a Maserati.”

The Joy of the Drive

For such a rare machine, the reasons for its rise are downright common. First, they look great.

“When I talk to the clients,” Wray says, noting their curvaceous front fenders and cool, sleek roofline, “they just think they’re the most gorgeous cars.”

The interiors complement the alluring exteriors, with extensive wooden accents across the dashboard and three-spoke steering wheel, leather coating on four seats, Veglia Borletti instrumentation, a Kienzle clock, and a Becker Europa II AM/FM radio. Even the space under the hood is detailed with quilted diamond stitch insulation and sound-deadening material.

Second, they drive well. Although it cost twice as much as a Corvette at the time, the Iso Grifo was more sophisticated, with a lighter-weight pressed-steel unitary body and chassis, four-wheel disc brakes, a capable rear axle with inboard brakes, and a coil spring suspension. The 350-horsepower, V8 engine could push the car to a top speed of more than 165 mph—equal to the performance of a Ferrari.

“If you take one that is properly restored to drive, it’s a pretty damn hard thing to beat,” Wray says. “They’re fast, they handle nice, the visibility is nice, it’s comfortable in the car.”

Later this year, the most prestigious car show in the world, thePebble Beach Concours d’Elegance, will highlight the marque in a special class on the verdant judging lawn by Spanish Bay. If Iso Grifo fares as well as its sister brand Bizzarrini, which had similar limelight treatment in 2016, its popularity is due to soar.

“Most folks in the car world still don’t give Iso a second look until they get educated,” says Serio. “The world will be a little wiser after August 2021.”

American Airlines soars on news it will boost U.S. flights in July