Following the lackluster performance seen in the previous session, stocks continued to experience choppy trading on Wednesday. The major averages once again spent the day bouncing back and forth across the unchanged line.

The choppy trading on Wall Street came as traders remained reluctant to make significant moves as the wait for more clarity about the near-term outlook for the markets.

Strong economic data has helped lift stocks to record highs in recent sessions, but traders may be worried the markets are becoming overbought.

In his annual letter to shareholders, JPMorgan Chase chairman and CEO Jamie Dimon acknowledged valuations are “quite high” but noted a multi-year booming economy could justify current prices.

“I have little doubt that with excess savings, new stimulus savings, huge deficit spending, more QE, a new potential infrastructure bill, a successful vaccine and euphoria around the end of the pandemic, the U.S. economy will likely boom,” Dimon wrote. “This boom could easily run into 2023 because all the spending could extend well into 2023.

He added, “Equity markets look ahead, and they may very well be pricing in not only a booming economy but also the technical factor that lots of the excess liquidity will find its way into stocks.”

Traders also kept an eye on the minutes of the Federal Reserve’s latest monetary policy meeting, although the central bank only reiterated that it is unlikely to change its ultra-loose monetary policy anytime soon.

Participants in the March meeting acknowledged the improvement in the medium-term outlook for real GDP growth and employment but continued to see the uncertainty surrounding that outlook as elevated.

With measures of the economy still below pre-pandemic levels, the Fed reiterated that it would likely be “some time” before the central bank considers changing its monetary policy stance.

On the U.S. economic front, the Commerce Department released a report showing the U.S. trade deficit widened more than expected in the month of February.

The Commerce Department said the trade deficit widened to $71.1 billion in February from a revised $67.8 billion in January.

Economists had expected the deficit to widen to $70.5 billion from the $68.2 billion originally reported for the previous month.

With the bigger than expected increase in February, the size of the U.S. trade deficit reached a new record high.

Most of the major sectors showed only modest moves on the day, contributing to the lackluster close by the broader markets.

Biotechnology stocks showed a substantial move to the downside, however, with the NYSE Arca Biotechnology Index plunging by 2.5 percent.

FibroGen (FGEN) led the biotech sector lower, plummeting by 43 percent after the biopharmaceutical company provided clarification of certain prior disclosures to the FDA regarding its kidney disease treatment roxadustat.

Significant weakness was also visible among chemical stocks, as reflected by the 1.8 percent drop by the S&P Chemical Sector Index. The index ended the previous session at a record closing high.

Gold and airline stocks also showed notable moves to the downside, while retail and natural gas stocks saw modest strength on the day.

In overseas trading, stock markets across the Asia-Pacific region turned in a mixed performance during trading on Wednesday. Japan’s Nikkei 225 Index inched up by 0.1 percent, while China’s Shanghai Composite Index edged down by 0.1 percent.

The major European markets also ended the day mixed. While the U.K.’s FTSE 100 Index advanced by 0.9 percent, the French CAC 40 Index closed just below the unchanged line and the German DAX Index dipped by 0.2 percent.

In the bond market, treasuries showed a lack of direction before closing nearly flat. Subsequently, the yield on the benchmark ten-year note, which moves opposite of its price, edged down by less than a basis point to 1.653 percent.

A report on weekly jobless claims is likely to attract attention on Thursday, while traders are also likely to keep an eye on remarks by Fed Chair Jerome Powell during a virtual International Monetary Fund Debate on the Global Economy. 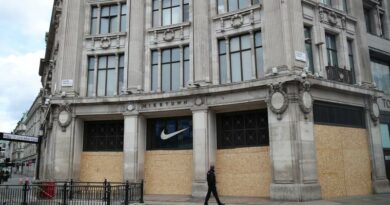