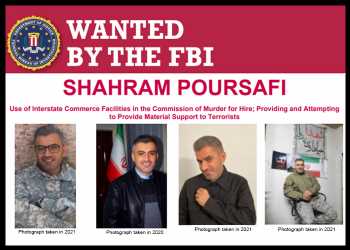 Sullivan said that the Biden Administration will not waver in protecting and defending all Americans against threats of violence and terrorism. “Should Iran attack any of our citizens, to include those who continue to serve the United States or those who formerly served, Iran will face severe consequences. We will continue to bring to bear the full resources of the U.S. Government to protect Americans,” he added.

Shahram Poursafi, also known as Mehdi Rezayi, was charged with use of interstate commerce facilities in the commission of murder-for-hire and with providing and attempting to provide material support to a transnational murder plot.

According to court documents, beginning in October 2021, the 45-year-old member of the Islamist militia attempted to arrange the murder of John Bolton, likely in retaliation for the killing of Iran’s Islamic Revolutionary Guard Corps – Qods Force (IRGC-QF) commander Qasem Soleimani in a US drone attack in January 2020.

Poursafi, a Tehran native, attempted to pay hired killers in the United States $300,000 to carry out Bolton’s murder in Washington, D.C. or Maryland.

“The Justice Department has the solemn duty to defend our citizens from hostile governments who seek to hurt or kill them,” said Assistant Attorney General Matthew G. Olsen of the Justice Department’s National Security Division. “This is not the first time we have uncovered Iranian plots to exact revenge against individuals on U.S. soil and we will work tirelessly to expose and disrupt every one of these efforts,” he added.

The IRGC is designated as a terrorist organization by the U.S. government.

Iran dismissed as “baseless and politically motivated” charges against Poursafi.

“Such baseless claims are made with political goals and motives,” the official IRNA news agency quoted Iran’s Foreign Ministry spokesman Naser Kanani as saying on Thursday.