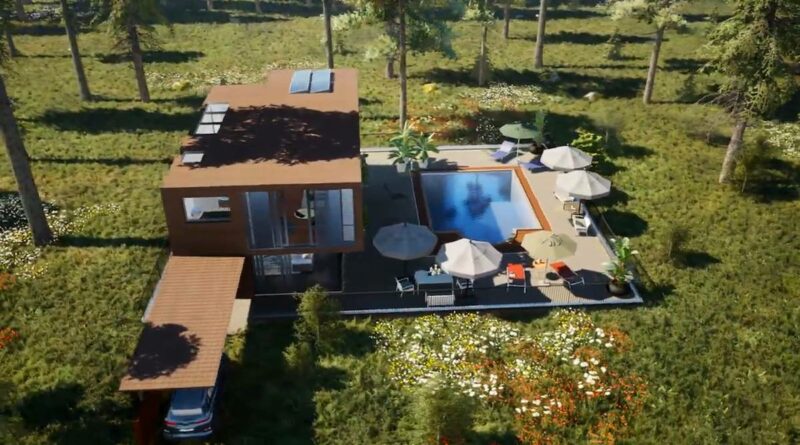 Zuru Tech, the new global house design and manufacturing business founded by Auckland’s billionaire Mowbray family, has given a rare preview of how it will operate as it prepares to produce its first home this year.

The opportunity to see behind the scenes of the secretive project, in the planning for 10 years, offers an insight into the company’s plans to transform an industry that its founders say has not changed radically in decades.

The business wants to hire 1700 staff, many of them engineers, in New Zealand and China. “Specifically in New Zealand, we are looking to hire innovative, future-thinking product design engineers and the best building industry experts,” says the 25-year-old Quin.

Zuru Tech aims to start by sending its first homes to Australia and New Zealand, but ultimately sees the whole world as its potential market.

Some 500 people are already at Zuru Tech in seven locations:

• About 50 software engineers are based at design offices in Modena and Milan, Italy;

• Web and online sales are in Ahmedabad, India;

• Structural engineers are based in Kolkata, where about 25 people are in the office which opened about eight months ago;

• In Huizhou, in the Chinese province of Guangdong, an office to test systems and equipment opened six months ago;

• Shenzhen, in southeastern China, is the current manufacturing hub, where a quarter-sized factory has already turned out the first Zuru Tech homes;

• Auckland, where Zuru Tech staff work closely with the Mowbrays, who live between Mahoenui near Coatesville and at the Viaduct Basin, where the 21 million euro MV Mahoenui is moored.

Quin said applicants for the 1700 new jobs should email [email protected] to apply.

“We are developing in-house building information modelling (BIM) software which customers, architects, builders and engineers can all use throughout the design and validation process,” Quin says.

“The prefabricated product is being designed so that we are capable of designing, manufacturing and assembling any building from a two-storey residential to 60-storey commercial/apartment buildings. We will also be capable of building this product in any region internationally, taking into account earthquake, thermal and other key building codes worldwide.”

Once a design is finished, the data generated from the BIM software will be sent to what is planned to be the world’s third-largest factory for prefabricated manufacturing. The resulting components will then be flat-packed into containers and shipped internationally to construction sites.

“To achieve this massive technical goal, we currently have 500 team members working across seven offices,” said Quin. “To continue accelerating the development, we are looking to hire an additional 1700 people to our teams internationally, ranging from software developers, automation engineers, structural engineers and others.”

The New Zealand office will be staffed by specialist construction industry experts from building services, window design, structural design and other key areas, as well as having a dedicated team of product design engineers working to develop a world-class prefabricated housing product, Quin said.

“We’re targeting the prefabricated construction industry: manufacturing, automation and product design. How do we take all these really core things we’ve developed over the years of knowledge and point that into the prefabricated [housing] industry?

“How do we … make the whole construction process more efficient, cheaper, and as high a quality as possible?

“He looked at the world and he looked at construction and property and decided that half the world’s GDP is in construction. We’ve been doing it [the same way] for hundreds and hundreds of years and if you project forward to 100 years from now, when we look back we’re probably going to wonder how we produced houses so inefficiently. We don’t think they’ll be produced in 100 years in the same way,” Mowbray said.

“So what we started doing is really solving that problem and it’s a huge problem because effectively you’re trying to design a tailored house specific to someone on our platform, on Dreamcatcher [software], then build something different every time, completely unique.

“So it’s a huge technical challenge we’re undertaking; multiple machines and robots to be able to achieve this. So effectively we’ll be able to take raw material – sand, iron ore, concrete – all of those to finished products without people, and that product will then ship to you and be assembled on-site, so it’s a very ambitious project and we’re really looking for great talent to join the team.

“That’s about 1700 people over the next 24 to 36 months on the project. It’s exciting and it will have a really exciting future if we can transform this market.”

Asked when the first houses would be produced, Mowbray said: “What the team has done is in the Italian offices they’ve been doing the software over the last however many years. In China, we’ve built a one-quarter-scale factory. It’s how the software integrates with the factory.

“So that factory runs 24/7, no people and produces a one-quarter [sized] finished building and everything is finished in production: lights, fittings, electric, finishes on that production line.

“From there, they’re going to build a full-scale production line that’s going to produce full-scale [houses] and that’s huge, about 3ha in size, and that will start producing houses by the end of this year.”

Zuru Tech would then build what it describes as the third-largest factory in the world: 2km long and 800m across, producing “large, large quantities of houses”.

Mowbray said “millions” of houses could be made and indicated that they would be priced at a fraction of today’s costs. In New Zealand, those present-day building costs can range from about $2500/sq m to $6000/sq m.

“It will cost you a tiny, tiny, tiny fraction of the price of what it costs to build now,” Mowbray said, adding that brother Mat had started the venture when he decided construction and property development was highly inefficient globally.

Concision at Rolleston near Christchurch, which is backed by the Spanbild building group, and Fletcher Residential at East Tamaki in Auckland are two off-site housing component manufacturers but they have little scale.

Spanbild chief executive Kerry Edwards said Concision is running at only 20 per cent capacity because of low demand for products as businesses had not embraced the concept. Some Government assistance was needed, he said.

Concision made products for about 250 homes last year, “but we know we can do 1000 a year if we get that demand and consistent flow of orders,” Edwards said.

Fletcher’s much-vaunted CleverCore house-building factory is turning out parts for about 200 houses annually of the approximately 900 the company builds. Using all methods, the giant of the sector is yet to reach its golden goal of 1000 houses per year, despite trying for years.

Fletcher Residential’s chief executive Steve Evans said several issues were causing the holdup. “We’re constrained by land availability, consenting timeframes and the assumption we made some time ago was that we were going to get more coming from government channels and that hasn’t happened as much or as fast as anyone thought.”

Fletcher built nearly 900 houses in the year to June 2021, and most take months to build.

Grant Porteous has long held doubts about building homes in anything other than traditional ways. He is managing director of the master franchise owner for New Zealand’s biggest housebuilder, GJ Gardner, which will build its 20,000th home this year. Some franchise owners are inter-generational now.

“Prefabrication or house-building factories are no silver bullet for the stretched residential construction sector,” says Porteous of the type of prefab or factory-built housing which we’ve so far seen in New Zealand.

But it seems that in its quest to build ready-made homes, Zuru is aiming at another level entirely to anything we know of in this country.

Think disruption of an entire industry and you’re closer to the Mowbray view of housing than the Porteous approach.

Zuru Tech’s plans are vastly different from the house-making factories we’ve seen come and go in this country in recent years. Zuru is not just aiming to change New Zealand house-building, but usher in an entirely new style of house design and manufacturing on a global scale.

But Zuru itself won’t actually build all those houses. Nick Mowbray said builders would become accredited to construct Zuru-designed and manufactured homes and factories could eventually be built outside China.

Any house design could be developed using any materials: “You won’t have to limit the home you want. Each home could be completely different, fully customised.”

That could lead to a potentially endless range of layouts, designs, sizes and finishes.

Quin said the first factory was actually the biggest challenge.

Around 10,000 staff already work for Zuru Toys in China “so it would potentially make more sense for Zuru Tech to be in China”. Previously, the company had indicated its huge factory could be in Vietnam.

While it is making the move into house manufacturing, Zuru is so far best-known for its toys, but it also markets consumer packaged goods including hair care, nappies and pet food. It bills itself as “a disruptive and award-winning company that designs, manufactures and markets innovative toys and consumer products”.

The company says it is “one of the fastest-growing toy companies in the world”. The business started in New Zealand, now has its headquarters in Hong Kong, “and distributes to most major retailers in over 120 countries”.

House and building plans would be designed to use autoclaved aerated concrete, a fifth of the weight of standard concrete, Quin said.

Building information modelling systems used gaming software for a better experience and customers would be able to view their new “virtual” homes in 3D before they were built. That would help them choose the best layout, materials and designs, Quin said.

On its website, Zuru Tech says it has developed the first software that crafts real buildings, via its own Dreamcatcher – the BIM software behind the entire venture.

“Dreamcatcher is leading the next building information modelling revolution,” the business says.

“We have developed a way for you to design and manufacture buildings with just one app. Experience our advanced yet easy to use drafting system, which enables you to design your building and get it ready for manufacturing in a single, effortless step, while visualising your future house realistically in real-time.”

The business says it takes visuals very seriously and therefore wants the interior design to be of stunning realism, all rendered in real time.

“To do this, we leverage our Unreal Engine 4, with VR and AR simulation, to best represent your building concepts. Our cloud-based 3D objects, materials and projects library is the heart of Dreamcatcher, enabling you to browse the finest furnishing models with physically-based materials,” Zuru Tech says.

Zuru Tech’s project library shows house design concepts so people can get an idea of how the system works.

“Our system is created in a way that enhances the quality and completeness of your projects, enabling you to receive reviews and feedback from international architectural specialists, and keep your projects on track with a worldwide network of passionate designers that can help you finish your design as efficiently as possible,” Zuru Tech says.

Photos show pre-fab house-building robots on factory floors – and those robots are all branded Zuru, specifically made to manufacture the new products in what Nick Mowbray terms a “lights out” factory with hardly any people, fully automated for fast production.

Now, Mowbray and Quin are readying for lights-on in the world’s first Zuru Tech home.

Walt Disney Co. Raises $11B In Debt To Bolster Financial Position Amidst COVID-19