Home » Business » What Will the Future U.K. High Street Look Like? 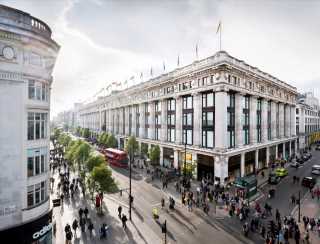 LONDON — After a year of store closures, layoffs, bankruptcies and a last-minute trade deal with its largest export market, the European Union, it remains to be seen how British high streets will emerge from the pandemic, and whether the pressures they face in 2021 will outweigh the opportunities.

Holiday shopping, retailers’ most profitable period of the year, was down 76 percent in Britain, according to the technology and consulting agency Capgemini.

Stores were open for a mere two weeks in December before being forced into a third lockdown by the sharp spike in COVID-19 cases and a new strain of the virus that continues to tear through the U.K. Hospitals are at a breaking point, while schools have delayed their Jan. 4 reopening in large parts of the country.

The lack of international tourism due to travel restrictions, and the removal of tax-free shopping for tourists from outside the U.K., are only two of the items among the major challenges British retailers are facing.

Jace Tyrrell, chief executive officer at the New West End Company, which manages some of London’s busiest shopping thoroughfares, including Bond Street, Oxford Street and Regent Street, said the removal of tax-free shopping for tourists will “erode the number of overseas visitors that in normal times account for around a third of footfall, and almost half of spending. This will be catastrophic for numerous sectors in the U.K. and will cost thousands of jobs.”

Dressing Up: Greatest Party Looks From the Fairchild Archives

That’s on top of the damage already wrought by the virus.

Harrods, which also set layoffs, opened a two-story outlet in Westfield shopping mall over the summer, to sell the unsold stock it had been sitting on as a result of prolonged closures during the first lockdown.

Despite the ongoing difficulties, local business taxes in London are rising and it remains unclear whether government relief will be extended in 2021. According to Tyrrell, recent re-evaluations have seen business rates rise by an average of 80 percent across London’s West End, “increasing pressure for businesses that are already struggling in challenging circumstances. If the relief for these rates is not extended, financial burdens will only worsen in the new year.”

He added that for retailers to have a chance at recovery in 2021, the British government’s “archaic Sunday trading restrictions” will also need to be revised, with operating hours extended post-lockdown. Under normal, non-COVID-19 circumstances, large stores and supermarkets can operate for six hours between 10 a.m. and 6 p.m. on Sundays, while smaller shops have more flexibility and can open for longer.

Tyrrell said that while New West End Company is working with all of its members and potential new entrants to the district, “without ongoing support from the government, the prospects for West End businesses remain uncertain.”

Yet there is also opportunity amid the uncertainty.

U.K. consumers are still craving the physical store experience, so while the country’s high streets might change shape, they won’t be shutting down in the longterm. Customers might be more at ease with online shopping than ever before, but “62 percent of shoppers would like to return to their previous shopping habits once the pandemic is over, with 64 percent stating that they miss shopping in-store,” according to Capgemini.

Once restrictions ease and vaccinations help people to resume their day-to-day lives, there will be a slew of campaigns highlighting the value of the shopping experience and the need to support brick and mortar businesses, according to Tyrrell.

In his view, “2021 offers a fresh appreciation of shopping and retail. With the vaccine comes the hope that, while consumers have changed their shopping habits, they will understand the inherent value that the high street brings.”

There’s also opportunity for high streets to get a full facelift and transform into more sustainable, digitally connected businesses — changes retailers had previously been slow to adopt but which are now a matter of survival.

“What is clear is COVID-19 has accelerated this pronounced shift to online and to consume in a more sustainable way. Retailers will need to respond to this to be prosperous again in the future,” Tyrrell added.

“We are confident that our customers, both local and global, will return to the West End when restrictions are eased, but we must embrace this evolution if businesses are to recover and return to prosperity in the new year.”

Physical retailers will also have to mine data, and use it like never before. The new year will see physical retailers invest in new technologies to understand better the customers who are entering their locations and to target them across multiple touch points.

“New technologies [now] enable department stores to understand who is browsing in their locations — not just the demographics of who is in the store, but in many cases, their identities,” said John Kelly, CEO of Zenreach, which specializes in marketing software for offline retailers.

“With that level of understanding, department stores can now do hyper-level targeting and retargeting of those visitors. We have seen that retargeting of users who have been to a retail store can be enormously powerful for retailers,” he added.

Sustainability is another key focus area for British retailers as they move into 2021 and adapt to the new landscape.

Many have already set ambitious goals to reach carbon neutral status by 2040, and are re-evaluating everything from store design to deliveries and the products they sell.

“The U.K. has an opportunity to rebuild a fairer, more sustainable economy in a post-pandemic era, which starts by cutting carbon emissions,” said the British Retail Consortium, which has been working with a wide variety of retailers including Burberry, Asos, Boots and All Saints.

“We believe that with vital support from the government, the retail industry can de-carbonize stores by 2030, deliveries by 2035 and products by 2040,” added the BRC.

Under Quarantine, Vintage Soloflexes Are Getting a Workout