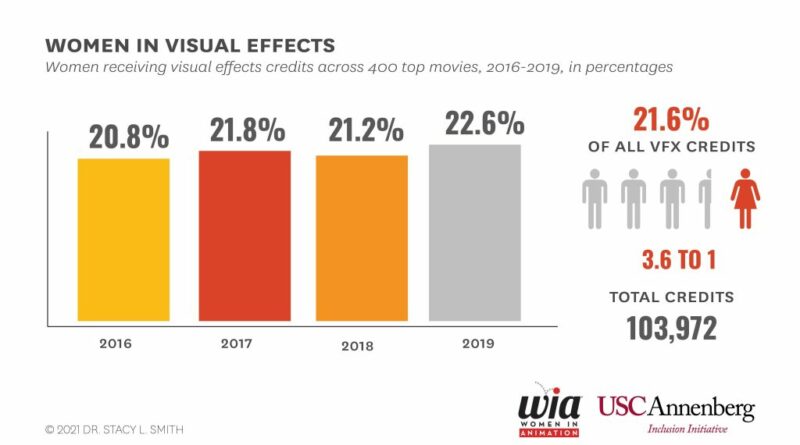 Women In Animation and USC’s Annenberg Inclusion Initiative today unveiled the findings of their latest joint study, “Invisible in Visual Effects,” looking at women’s participation in the VFX industry.

The quantitative study specifically examined women working across 400 top-grossing films from 2016 to 2019, assessing their overall prevalence and leadership credits. It also explored the prevalence of women within the executive ranks of 60 VFX companies, and awards recognition for women in the VFX arena. The study was complemented by a qualitative investigation, consisting of 82 in-depth interviews with women in VFX and industry decision-makers, the ultimate finding being that the overall participation of women in VFX is “very low.”

While the study found that women sampled filled between 13.9% and 21.5% of the pipeline jobs, which lead to supervisory roles, it also found that they held just 16.2% of senior positions within the VFX industry across the four-year period. This varied in the end by position, as women comprised only 2.9% of VFX supervisors, but constituted 46.7% of VFX producers. Women hold only 23% of the industry’s VFX editor positions, holding less than 10% of other kinds of positions, such as animation supervisor (3.7%), lighting supervisor (2%), composting supervisor (7.4%) and CG/3D supervisor (3.5%).

The 60 VFX companies looked at in terms of their leadership profile were chosen and sorted into three tiers based on their frequency of work across top movies. Slightly more than one-quarter (26.9%) of execs there were women, with women of color holding just 5.5% of exec roles.The highest tier of companies, representing 20 organizations, had the highest percentage of women and women of color executives—30% and 6.2%, respectively. Fewer than 25% of executives across the middle and lowest tiers were women, with women of color comprising 4.8% of roles at both tiers. Responses on the qualitative side of the study found that three factors contribute independently and interactively to prevent women in VFX from reaching positions of leadership. These include issues related to workforce composition and the prevalence of men in the industry; workplace culture that does not meet women’s needs in terms of work/family balance, or encourage their participation; and leadership perceptions that link supervisory roles to masculine traits.

One finding in terms of awards was that only one woman has been nominated for and won an Academy Award for Visual Effects. At the Visual Effects Society Awards, women fared better—comprising 12.8% of nominees between 2016 and 2020 and 9.3% of winners. Women of color comprised 2.1% of nominees but none won an award in the time frame examined.

“The lack of women in the visual effects industry is part of a larger pattern of exclusion across the film industry,” said Dr. Stacy L. Smith, who founded the USC Annenberg Inclusion Initiative over a decade ago. “VFX companies and studios have to think critically about their hiring and promotion practices as well as the cultures they create internally if they want to see more women and in particular women of color ascending to leadership roles.”

“As the data from this landmark study shows, there are clearly obstacles in place for women in the realm of visual effects,” added WIA President Marge Dean. “We hope that this fact-based awareness will open more doors and repair broken rungs on the leadership ladder to create a more diverse and inclusive environment in this sector of the entertainment industry.”

“Invisible In Visual Effects” is the second study resulting from a partnership between Dr. Smith, the Annenberg Inclusion Initiative and Women in Animation to explore women’s participation across industries. Findings of the organizations’ first study, “Increasing Inclusion in Animation,” were unveiled at the Women in Animation World Summit at Annecy in 2019.

‘Game Changers’ Over For Emilio Estevez: Not Returning For Season 2 Of ‘Mighty Ducks’ Spinoff 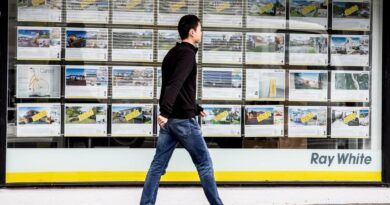 Are Kiwis finally moving on from their property investment obsession?

25 Worst Holiday Storms of All Time