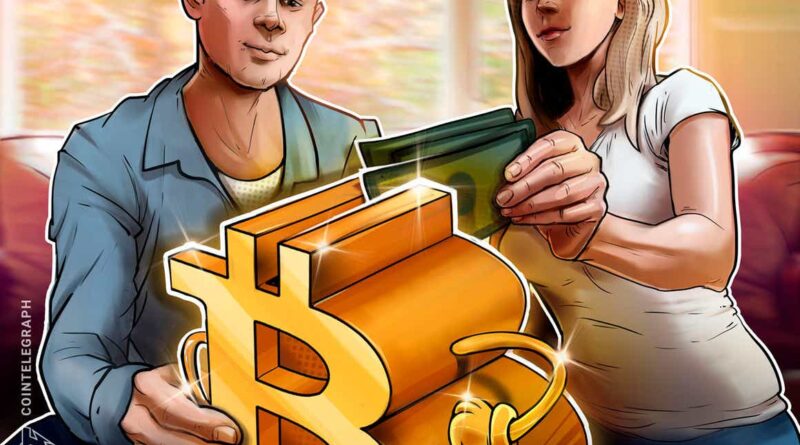 An average American taxpayer received three rounds of stimulus checks from the United States government as a means to reignite the economy by increasing consumers’ spending potential. For many, this meant an opportunity to invest in Bitcoin (BTC).

A Cointelegraph report from Aug. 26 shows that 11% of the respondents between the ages of 18 to 34 reinvested a part of their stimulus checks into cryptocurrencies. Adult Americans that reinvested the first round of stimulus payments from April 2020 into Bitcoin have realized a net profit of roughly 442%, turning a $1,200 investment into $5,304 as of Oct. 31, 2021.

The second stimulus check of $600 was distributed between December 2020 and January 2021, just two months before Bitcoin achieved an all-time high of $65,000 for the first time. If reinvested in Bitcoin, the second check would return a profit of 152% (approximately $312).

The average payout for the third stimulus check was set at $1,400, which was made available for eligible taxpayers from March 2021. Since then, Bitcoin underwent a three-month-long bearish market but made a full recovery to cross $65,000 in trading value for the first time. Despite the fluctuations, reinvesting the third stimulus check in Bitcoin would return a modest 7% or $98 in profit at the time of writing.

Based on the findings above, a timely reinvestment of $3,200 worth of stimulus checks into Bitcoin would return a total profit of $4,514 (nearly 71%) by the end of October. In a study conducted by Harris Poll on behalf of Yahoo Finance, most Americans willing to invest in cryptocurrencies cited primary interest in Bitcoin and Ether (ETH).

Crypto analyst PlanB’s prediction on Bitcoin checks out for the third consecutive month.

According to PlanB, Bitcoin is set to exceed $98,000 in value by the end of November. If the prediction holds true, the stimulus check investments will further realize 58% profit from today’s market price.

El Salvador announced Bitcoin as a legal tender on Sep. 07 and has ever since started reinvesting its U.S. dollar reserves on procuring Bitcoin.

President Nayib Bukele announced the addition of 420 Bitcoin on Oct. 28, bringing up the national reserve to 1,120 BTC, worth $87.4 million.

According to Bukele, once the country makes a profit on its Bitcoin investment, an equivalent amount from its dollar reserves is reinvested for funding various initiatives. As a result, the total value of El Salvador’s national reserves maintains its original value in terms of the US dollar.

Peter Smith – CEO of Blockchain – ASK HIM ANYTHING!