Home » Bitcoin and Many Other Coins Have Taken Serious Stumbles 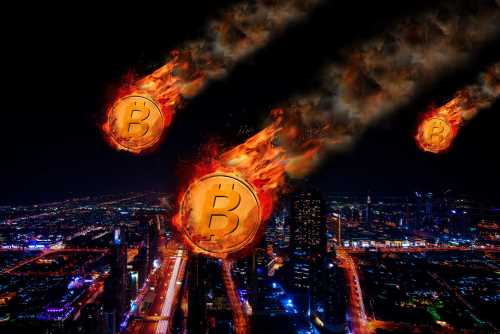 The price of bitcoin has taken a horrible turn. The world’s number one digital currency by market cap – after reaching a new all-time high last week following Coinbase’s debut on the Nasdaq – has dropped roughly $8,000 in just a matter of days that has brought the asset down to roughly $55,000 per unit at the time of writing. It was recently trading as high as $63,000.

In addition to bitcoin, other major altcoins including Ripple’s XRP, Dogecoin, Cardano and Ethereum have also taken serious tumbles. The entire event has been summed up as a “flash crash,” meaning there was a swift and sudden dip in the digital asset space that appears to have affected most of the world’s mainstream cryptocurrencies. As much as $300 billion has disappeared from the overall crypto market cap within a short period.

The bitcoin price has arguably been affected the most, with a ten percent dip at press time. Many analysts – including Mike Novogratz of Galaxy Digital fame – are now warning crypto traders that a “washout” could be occurring in the coming future, meaning assets could drop in price even further over the next few weeks.

In a recent interview, Novogratz says:

In the next week, certainly we could have some volatility because of the excitement around Coinbase… I have seen a lot of weird coins like dogecoin and even XRP have huge retail spikes, which means there is a lot of frenzy right now. That never ends well, and so we will probably have a washout at one point.

The recent price surges can likely be attributed to anticipation from Coinbase’s public debut on the stock market. As one of the world’s largest and most popular cryptocurrency exchanges, Coinbase decided in late 2020 that it would engage in an initial public offering (IPO), meaning it would unveil stock that investors could trade.

This marked the first time a company in Coinbase’s shoes would make such a move, and traders got excited when they found out that they could begin purchasing Coinbase stock as early as April 14 of this year. The news caused many of the world’s leading cryptocurrencies – including bitcoin and Dogecoin – to spike to new levels.

This Momentum Is Hard to Maintain

However, as we have seen in the past, when currencies rise to such heights within relatively short periods, the momentum proves a little overwhelming, and the assets in question cannot sustain the growth they are being put through. As a result, they dip almost immediately after the hype dies down, and the higher they have gone prior, the harder they tend to fall.

Before the unveiling of the stock, Novogratz claimed the Coinbase IPO was the “Netscape moment” of the blockchain world and would likely cause several other bitcoin and crypto-based firms to follow suit and issue stocks of their own.

DMX Markets Review – All You Need To Know About This Broker