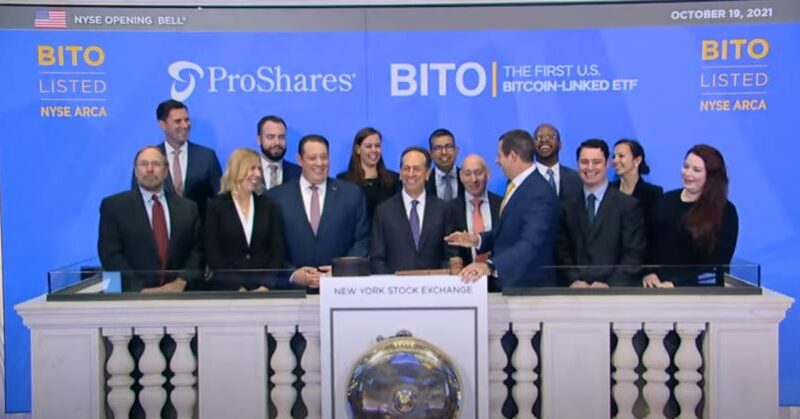 The numbers are in, and the Bitcoin Futures ETF had the biggest debut of the year. By far. We have to “exclude ETFs where their Day One volume was literally one pre-planned giant investor or BYOA,” but that’s fair. Apparently, the ProShares Bitcoin Strategy ETF got to the top naturally, via real trades by real people and institutions. Considering that just its approval by the SEC seemed to catapult Bitcoin’s price to the edge of an All-Time High, a question arises. How will the market react tomorrow? And the day after that?

If we don't exclude ETFs where their Day One volume was literally one pre-planned giant investor or BYOA (not natural), it still ranks #2 overall. Here's that list. The reason some of these shouldn't be included IMO is they don't really represent grassroots interest. pic.twitter.com/wmZiHnpFrS

Considering the first-ever Bitcoin Futures ETF “also traded more than 99.5% of all ETFs,” it’s fair to say the launch was a huge success. What does it mean for the following ETFs? According to Balchunas, it’ll be hard for them to succeed. “Every day counts because once an ETF gets knows as ‘the one’ and has tons of liquidity, it’s virtually imposs to steal.” And, what does this mean for the market in general? NewsBTC already covered this question:

“Although these ETFs have attracted criticism for being backed by futures contracts and not the underlying asset, they could still have big implications for Bitcoin — allowing tax-sheltered and retirement accounts to easily get exposure, and potentially opening the cryptoasset to a much broader audience.”

Why Is There A Bitcoin Futures ETF Instead Of A Bitcoin ETF?

Who better to answer this question than the SEC’s chairman himself, Gary Gensler told CNBC:

“What you have here is a product that’s been overseen for four years by the U.S. federal regulator CFTC, and that’s being wrapped inside of something within our jurisdiction called the Investment Company Act of 1940, so we have some ability to bring it inside of investor protection.”

So, the Bitcoin Futures ETF falls under the Commodity Futures Trading Commission jurisdiction. Plus, it tracks the Chicago Mercantile Exchange (CME) Bitcoin futures. And the SEC considers that the institutional support will protect the customer. According to them, the underlying asset, Bitcoin, is too volatile and subject to manipulation.

The first persons to propose a Bitcoin ETF in the USA, the Winklevoss twins, lament that when they did the price of Bitcoin was $68 and nowadays is $64K. “That’s almost a 1000x return in the meantime. I’m glad we got here, but it has taken too long.”

When @cameron and I first proposed a bitcoin ETF in July 2013, the price of bitcoin was $68.

Today, upon the launch of two bitcoin futures ETFs, the price of bitcoin is $64,000.

That's almost a 1000x return in the meantime. I'm glad we got here, but it has taken too long.

“The launch of the first bitcoin-linked ETF in the U.S. will bolster the broader crypto market and help an entirely new investor class experience the benefits of bitcoin as a legitimate asset. However, a derivatives-based bitcoin ETF is not where we want to be long-term.” What Are The ProShares Bitcoin Strategy ETF’s Characteristics?

The next few days will be crucial for this story. There’s a possibility that today’s demand was orchestrated, at least in part. If this happened, it’ll be very obvious in the following days. In any case, the fund’s official site defines the first Bitcoin Futures ETF as:

And alerts the clients that “The fund does not invest directly in bitcoin,” and that “The price and performance of bitcoin futures should be expected to differ from the current “spot” price of bitcoin.” Forewarned is forearmed.

EU Plans for Crypto Regulation as Stablecoins Remain a Concern