Home » Crypto » Bitcoin’s next top could be between $75K and $306K, Kraken research suggests 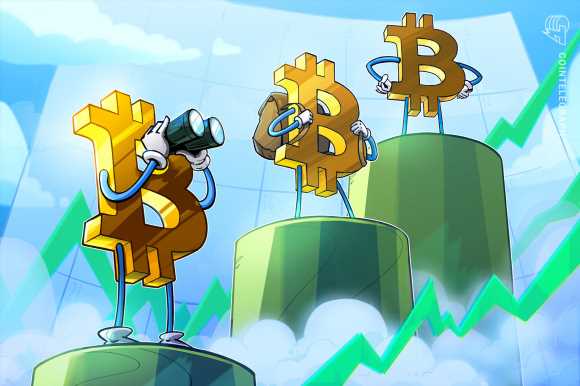 Analysis of Bitcoin (BTC) price action dating back to 2011 suggests the coin price could next top out somewhere between $75,000 and $306,000, research from Kraken shows.

Based on one reading of a logarithmic growth curve that connects historical tops and bottoms, a coin price of $75,000 would signal Bitcoin’s entry into overbought territory, marking the end of its current bull run.

“Based on previous cycles, Bitcoin could likely continue appreciating gradually in price before ultimately going parabolic and hitting resistance, which will signal the end of its fourth bull market cycle,” the report states.

Analysis of historical price retracements throws up some even bolder predictions. All things being equal, if BTC were to continue along its current growth curve and then enter a retracement similar to prior market crashes, the next bottom would be somewhere around $30,000.

Based on this proposed bottom one can attempt to make predictions about the next market peak, depending on the extent of the retracement.

Were Bitcoin to retrace 70% during the current cycle, the coin price would have to reach a peak of $102,000 in order to hit the aforementioned bottom of $30,000.

Similarly, a 90% crash would place the next top at $306,000, while an 86% drop — the average retracement of previous market cycles — would imply an upcoming market peak of $221,000. Either way, states the report, history would suggest Bitcoin remains “far and away” from a market top.

Diving into the historical data once more, the first quarter of 2021 proved to be the third-best performing quarter in Bitcoin’s 12-year existence, based on return percentage and annualized volatility.

Kraken’s research shows that March has historically been a bad month for Bitcoin, with the coin price appreciating just twice during this period since it began trading. In the past, March has, on average, underperformed February’s growth by 11%.

The report also notes that Bitcoin is now trending in a manner similar to the first quarter of 2013 — the most fruitful Q1 in the coin’s history. A correlation of 0.82 between the two is an encouraging sign and could subvert the historic trend which sees Bitcoin underperform in March.

Bitcoin recorded five consecutive months of positive returns leading up to the time of publication. That’s a sight witnessed just once before — in 2017 during the lead up to that year’s bull run and subsequent market peak.