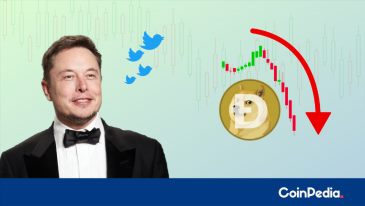 DOGE Price Slashed below the levels yet recovering!

DOGE price is experiencing a series of continuous dip in the past couple of days, shedding the profits more than 40%. As the pump was triggered with various attempts from Tesla CEO, Elon Musk, it seems that the impact was short-lived.

The crypto masses were fumed when Tesla’s balance sheet included more than a billion of Bitcoin investments. However, with the announcement of holding some Dogecoin for his son, Musk propelled the price surge yet again.

However, in a recent update Mr Musk with a new Tweet has extended his support to the major Dogecoin holders,if they wish to sell off their holdings. May thought it as an attempt to plunge the price to get yet another opportunity to buy the asset at the dip, yet some other sections thought wisely.

According to a popular analysts, Elon Musk wants DOGE to succeed and hence his ultimatum is good for the project. The analysts also tells that the impact on price may not be visible on immediate basis yet it forecasts that his jokes aren’t just jokes but sees DOGE as the leading currency of the internet.

The DOGE price appeared to have holded a upper hand in the weekend as the price kept surging to hit $0.0734, yet a major crash was awaited. The weekend slash was so drastic that it shed off nearly 35% of the price dragging the price close to $0.047. However, the DOGE price reinstated the lost momentum in the early trading hours and surged more than 20%. The price initiated a surge since the past couple hours regaining the previous position above $0.055.

At the time of writing, the DOGE price is $0.05665 with a dip of nearly 13.61% in the last 24 hours. Currently, the prime focus would be to hold the existing levels and attempt to hit the higher levels in order to continue surging.

? Beyond Bitcoin: Could blockchain change the world? | The Stream