Home » Crypto » How To Get Rewards for Your Memes? 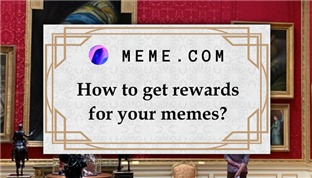 Memes have been around since the 90s, when the first memes were used in forums, and believe it or not, email! The internet was in its infancy, and so were memes. One of the first memes that went viral was that of Baby Cha-Cha. In the 90s, a meme or video went viral in a completely different way than present-day memes. The only way memes could be shared was through chat forums or email. There was no concept of social media or smartphones.

The Evolution Of Memes

The oldest memes were short videos, and by the 90s, we saw the introduction of graphics. As time passed, the format and context of the memes kept changing, but the original idea of what a meme was still coming through. Memes found their way into the crypto space in 2013, just as the market was gaining traction. The first memecoin was Dogecoin, a satirical take on Bitcoin and other cryptocurrencies. Today, Dogecoin is the sixth largest cryptocurrency in the world, with a market cap of $38,777,455,120. The meteoric rise of Dogecoin showed the crypto community that there was a market for memecoins and meme memetic asset market.

Memes today have become an integral part of the crypto space and can be monetized to give their creators the value they truly deserve. Another critical addition to the world of memes is the memetic asset market, which has gained significant popularity lately. Memetic asset markets make it possible for memes to be linked to an NFT, giving the meme’s creator the ability to monetize and sell the meme to third parties.

Memetic asset markets enable the monetization of memes, turning them into NFTs. This ties memes to an NFT, allowing their monetization. Memetic asset markets build the meme community and increase the popularity of memes in the crypto space and on the blockchain. Memes are creating real-world value, and recent NFT sales have left no doubt that there is a serious market for meme NFTs, and that the memes connected to NFTs are increasing in value exponentially.

The original Disaster Girl NFT meme sold for $573,136, while the Nyan Cat NFT meme sold for $515,817. The Overly Attached Girlfriend NFT meme sold for an eye-watering $459,260. These aren’t the only examples of NFT meme sales. However, the numbers prove that memes have the ability to create some serious real-world value and that there is a significant demand for meme NFTs.

The Concept Of Meme Exploration

With the growth of the NFT market, many bigger organizations are getting in on the act. The most notable examples are the NBA (NBA Top Shot) and the New York Times. NBA Top Shot sells moments from games and digital collectible cards as NFTs. The New York Times recently sold the rights to an article for a staggering $550,000.

Meme.com is creating a meme-centric economy that is focused on rewarding content creators and giving them ownership of their creations. The platform will enable creators to monetize their creations and help create value from their ideas and creations. Platform users will also be able to vest in trends that they believe in, and meme.com will mint one coin for each meme created.

How Does Meme.com Work?

Meme.com combines Wikipedia and Dogecoin to create a platform where anyone can submit their ideas and artwork, becoming a part of the world of internet memes. Meme.com aims to empower creators and reward them through the following.

Users can join certain memes as they start their journey and get a percentage of a particular expedition by paying $Memecoin. The value of expeditions is tied to the total number of mTokens bought. So if users buy more mTokens for a specific expedition, the value of the expedition increases. Token holders are also rewarded by expeditions, with two types of rewards in play at the moment. These are sponsor rewards and treasure rewards.

Users can also earn $Memecoin by voting for the content they find best in the debate room. Debate rooms also accept NFTs owned by players, enabling them to win even more rewards.

Meme lovers and creators can register on meme.com, becoming a part of the meme ecosystem and the “Majestic Establishment of Memetic Exploration.” Meme.com rewards users for discovering the next big meme or trend. Users can also add value to the meme community and facilitate the growth of new memes.