The report revealed the U.S.-based block reward miner (NASDAQ: RIOT) increased its hashrate by 460% during the previous year. Despite the spring BTC halving, the company more than doubled the BTC’s amount held on its balance sheet in 2020 from 514 BTC to 1078 BTC.

Riot’s total mining revenue generated in 2020 ended at $12 million, substantially up 78% year-on-year, from the $6.7 million recorded in 2019. This improvement was thanks to an increase in the operational hash rate. Riot’s total computational power grew from 101 pentahashes per second (PH/s) as of December 2019 to 566 PH/s as of December 31st.

Overall, the company delivered mixed results, reaching profitability in the fourth quarter with $3.9 million in net income on a GAAP basis, yet still posting an overall net loss of $12.7 million for 2020. Nonetheless, this was an improvement from a year ago when it posted a net loss of roughly $20 million in 2019.

Riot announced its cash and digital currency holdings from $11.3 million in 2019 to $235 million last year. It noted that it is still reliant on equity and debt financing to fund its operations, with its deficit increasing from $221 million as of Q2 2020 to $299 million at the end of the 4th quarter.

Shares of Riot surged 213.5% since the year began alongside other BTC-related block reward mining companies. This illustrates there is consumer demand for altcoins.

How the block reward mining industry works is not how Bitcoin was designed to work. Absent from the press release is the amount of fee revenue generated from processing transactions or growth metrics in this area.

Infrastructure companies supporting the real Bitcoin blockchain, under the ticker symbol BSV, have pivoted to supporting enterprise customers and a fee-based economy. This enables them to be better equipped to withstand a bear-market correction when the speculative digital token trading markets bubble burst.

Infrastructure companies must leave behind their fixation on the subsidy reward and mature their business model. That is, if their underlying principle remains to find a way for their business to continue—and ultimately provide as much value as possible to their shareholders. If not, and short terms profits are all that matter, enjoy altcoin season and mining altcoins like BTC. 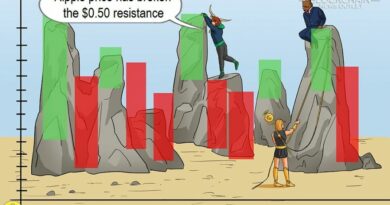