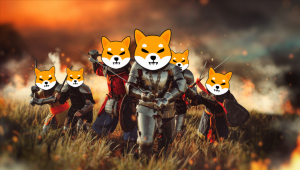 Shiba Inu is the talk of the town. The meme coin is now leading the pack of meme coins. The uptrend has influenced other meme coins to follow its suit. Shib army is hailing the coin for its exponential run. The coin has reportedly seen gains of 83%, resulting in SHIB enthusiasts being hopeful of a doge-like run.

The Reason for Shib’s Uptrend?

The coin has seen a pump after Elon Musk shared a picture of his pet dog, with the caption “Floki Frunkpuppy”. Shiba Inu’s NFT landing on OpenSea, acquisition by whales, have also brought impetus to its surge. Substantial sources suggest that currently, the SHIB holders have risen to 682,031.

However, sections of netizens believe the uptrend might not be a bubble. As it does offer practical capabilities like Shiba Swap. Which sets it apart from the likes of Doge. Meanwhile, sections do opine with the other end of the spectrum.

How Long Will the Rally Last?

It is worth mentioning that the uncertainty of the market can impel the prices in any which ways. Moreover, the sentimental values of investors play a vital role in SHIB or any meme coin for that matter. However, past uptrends suggest that the trend has lasted for a day or two. And in the intervals of 12-15 days. The current statistics hint at a similar trend for SHIB.

Collectively, the rally has brought enthusiasm to the space. However, the coin will have to stick to its $0.0000100 mark, to not fall prey to bears. We can expect a similar uptrend post its consolidation period. Professionals do believe this to be a healthy trend over doge-like run.

what is cryptocurrency? explained in hindi