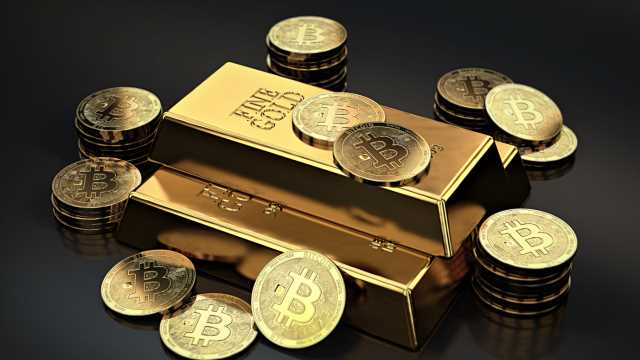 The chief investment officer of global investment firm Skybridge Capital says bitcoin still has more upside than gold. While expecting both gold and bitcoin to rally, he said his hedge fund is sticking to bitcoin.

Troy Gayeski, co-chief investment officer (CIO) and senior portfolio manager at Skybridge Capital, a $7.5 billion hedge fund, says gold is good but bitcoin is better, Bloomberg reported Sunday. He believes that both gold and bitcoin are likely to rally even as the Federal Reserve moves to taper asset purchases, elaborating:

We’re going to stick to bitcoin and crypto because we just think there’s more upside.

While acknowledging that bitcoin has more volatility than gold, the CIO noted: “you’re going to capture a little bit more juice than you will in gold from that same phenomenon.”

The price of bitcoin soared to the $65,000 level in April before plunging. It currently stands at $32,512 based on data from Bitcoin.com Markets. Meanwhile, gold came close to sinking into a bear market in March but its price recovered and erases year-to-date losses.

All fiat-currency alternatives — which have all gone through fairly recent substantial corrections — are in a much better place now to handle that eventual taper and gradual slowing of money-supply growth, than they were as they were making higher-highs after higher-highs.

Skybridge launched its bitcoin fund in December last year with $25 million. By the time it opened up to the public in January, the fund’s assets under management had risen to $310 million. The Skybridge Bitcoin Fund is an institutional-grade fund investing in bitcoin. Fidelity Digital Assets, a division of Fidelity Investments, serves as the firm’s bitcoin custodian and Ernst & Young serves as its auditor.

According to Gayeski, the Skybridge Bitcoin Fund is up 51.2% as of June 1, from its inception last December.

The firm’s founder, Anthony Scaramucci, has predicted that the price of bitcoin will reach $100,000 before the year-end simply due to heavy demand for the cryptocurrency and its diminishing supply.

In March, the firm registered a bitcoin exchange-traded fund (ETF) with the U.S. Securities and Exchange Commission (SEC). Gayeski expects the SEC to approve the product by the fourth quarter of 2021 or the first quarter of next year.

What You Should Know About Bitcoin Casinos

HitBTC Scammers Get Two Years in Prison in the US