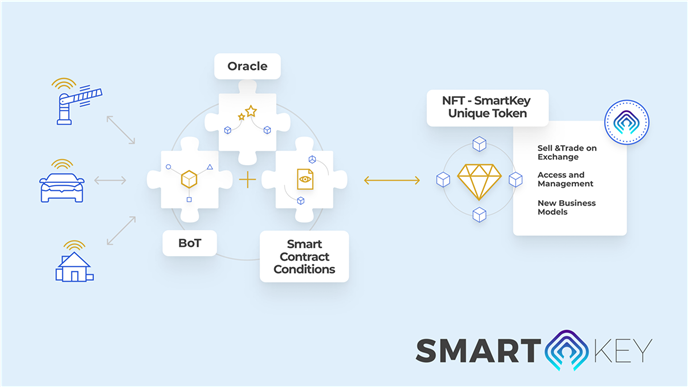 NFT tokens are taking over the investment scene these days, with unbelievable valuations and all kinds of brands and major artists rushing in. On the technology side SmartKey shows that NFT tokens can be used for more than just speculation, bringing real value and utility to the world. The project is now listed on KuCoin, with support for trading SKEY starting on March 19, 2021.

SmartKey is a platform that connects the DeFi revolution with real world objects. Unlike so many projects in the field that promise a lot but have nothing real to show for it, SmartKey has working blockchain technology that is already being used not only by companies but also by government emergency services to save lives. Last year it made headlines around the world when the city of Olsztyn in Poland used blockchain technology to streamline its fire, ambulance and police teams, reducing critical response times – using SmartKey.

The advanced technologies powering SmartKey are critical to the sharing economy of the 21st century. The platform combines Oracle II generation technology with Blockchain Of Things (BoT) technology – creating digital contracts that give access to specific values such as office and home rental, parking and carsharing systems. The combination of these 3 technologies creates a unique smart contract in the form of an NFT token called SmartKey which defines the rules of access to a given value managed by an IoT sensor that grants access. The NFT – SmartKey contract is an IT record of the device and manages the locks, sensors, user verification, price, time and many others.

For simple real world examples, think about a car that only unlocks with a specific NTF token or a hotel where visitors can unlock doors using a SmartKey device, so IoT sensors will log how long they have been in the room and charge them automatically. The system is so advanced it can give value to the contract in the form of determining the time of access to the room, price, determines the rules of user verification, can add a deposit or choose other elements that will affect the value, such as weather, seasonality, which are received from an Oracle.

Why Should You Invest in SmartKey?

SmartKey technology will create hundreds of new business models that were not imaginable before. But you don’t need to launch a smart city project yourself or something like that to benefit from it – you can already take part in the success today. The SmartKey token (SKEY) is now available on KuCoin cryptocurrency exchange, with support for the trading pair SKEY/USDT starting on March 19, 2021.

The technology is trusted by impressive partners such as: Teltonika, Ferguson, Chainlink, Geodb and Ferrum. Teltonika is a company that has sold over 10 million IoT devices and actively supports the project, its devices are used by over 1,000 corporations around the world. Ferguson is the leader of Smart Home solutions in Europe, and the remaining projects provide support for blockchain processes, i.e. active deposits or the possibility of geolocating blockchain records.

Many supporters of the SmartKey project believe it has what it takes to become one of the top 10 crypto assets by market valuation as it has many things going for it. The project has been operating since 2018 and was created by an experienced team of entrepreneurs from the IoT and Blockchain industries. The technology is actually useful in the real world today and the number of potential planned adaptations is in the tens of millions for IoT devices.

The project also has little competition in the field: only 4 projects out of 4,000 listed on CMC or Coingecko are working on a similar technology. It has a wide product range (Cloud, Business and Rental Apps, Rescue Solution, Wallet and Key Manager), a fast growing community of over 50,000 users and shown stable growth since it started trading on a DEX. The leading project in the segment, Chainlink, now has a market cap of over $12 billion, so SmartKey investors still have a lot of opportunity to grow to similar sizes and beyond.

This is a sponsored post. Learn how to reach our audience here. Read disclaimer below.

Gold-based Cryptocurrency TMTG to be Listed on BitForex

3 Ways to Save Money with a Home Warranty