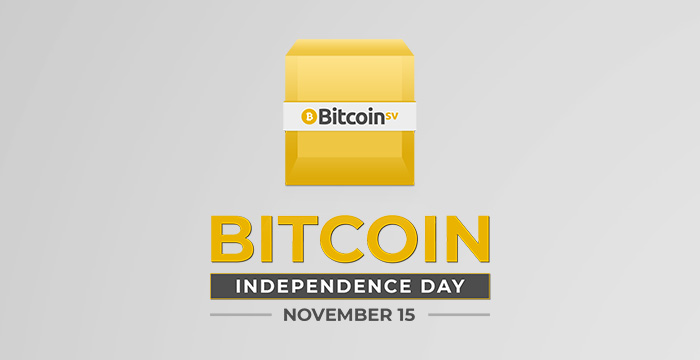 November 15 is Bitcoin Independence Day, marking the date in 2019 that BSV developers drew a line in the sand and declared there would be no further interference with Bitcoin’s basic rules. In the three years since then, BSV has restored those rules as originally defined by Satoshi Nakamoto, and proved that Bitcoin has capabilities far beyond simple payments—while being able to scale on-chain and unbounded.

It has done so under the guidance of Satoshi Nakamoto himself. Bitcoin’s creator Dr. Craig S. Wright was unmasked via being doxed as Satoshi in 2015 and has faced countless challenges and attacks to prove his identity ever since. That battle may be about to reach its climax this month, as the definitive Kleiman vs. Wright trial set to uncover more evidence of Dr. Wright’s key role in Bitcoin’s history.

It’s not a “birthday,” as such. BSV has existed as Bitcoin since Satoshi Nakamoto created the first block in January 2009, and released the Bitcoin protocol software on SourceForge for anyone to start mining. BSV’s transaction history goes all the way back to that date and it is the only blockchain carrying the “Bitcoin” name that still adheres to the original rules.

Why was it important for Bitcoin to scale on-chain?

Bitcoin’s ability to scale has been an issue for debate since the moment Satoshi Nakamoto announced his invention (months before the first Bitcoin coins even appeared). Some said it could scale directly on the blockchain, gradually increasing its capacity over time as technology itself advanced. Others argued this was impossible, saying capacity should be limited and the blockchain used only as a “settlement layer” for activity on other networks.

Satoshi himself argued for on-chain scaling. Indeed, it is the only way Bitcoin’s economic incentives can still work, securing everyone’s data while keeping the network fast and cheap enough for everyone to use.

Independence came after several battles and at a cost, as it often does. When BTC forked off from the original Bitcoin protocol in August 2017, formally separating the “big blocker” on-chain scalers and the “small blockers” who said blockchain transactions should be limited, exclusive, and expensive.

They engaged in a controversial “hash war” to determine who had the most support in terms of processing power. That created BTC and BCH, which still exist to this day. However, that wasn’t the end of it—in November 2018, a group of BCH developers opposed even more deviations to Satoshi’s original rules. That group included Dr. Wright/Satoshi and his supporters. Following another hash war the network split again and BCH forked off, with Bitcoin taking on its fourth (previous tickers include XBT, BTC, BCH) and permanent ticker symbol BSV.

BSV removed the alterations made to Bitcoin after Satoshi’s disappearance from the project, alterations that had broken Bitcoin’s economics and made the network less secure. It restored the original Bitcoin protocol in full at the start of 2020, most notably by removing BTC’s “temporary” block size limits.

Since then, BSV has continued to prove the “big block” argument correct. Bitcoin can scale on the blockchain. It can remain secure while still delivering fast and cheap transactions at any volume. It has proved Bitcoin is a functional payments network and much more, with the ability to run complex contracts and tokenized assets, store timestamped data in volumes that rival the existing internet, and reward its processors (“miners”) without needing to artificially pump digital asset prices.

It does all this while keeping fees to a fraction of a cent per transaction, whether a user is a global enterprise processing thousands of transactions per day or an individual making a single payment. On some days, BSV processes more data than all other blockchains combined—and all on-chain.

The “SV” in BSV stands for “Satoshi Vision” and BSV has shown why maintaining Satoshi’s vision is important. Despite what some have claimed, Satoshi Nakamoto and his plan for Bitcoin remains important as it goes far beyond what most understood. With Satoshi’s identity currently the basis of a multi-billion-dollar court trial, Bitcoin Independence Day is perhaps more important this year than ever before.

Ethereum is Gearing Up for a Parabolic Push; Here’s How Far It May Run