Home » Crypto » Weekly Analysis of the Cryptocurrency Market: Altcoins’ Upward Move Is Constrained as They Revisit the Previous Lows 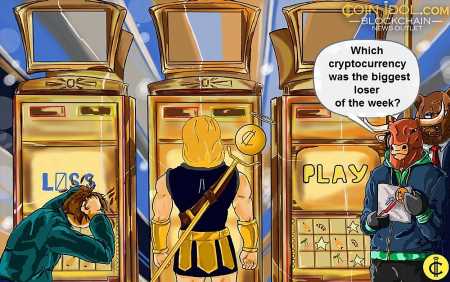 Cryptocurrency markets have been under selling pressure since November 6. Altcoins have been falling and as a result have returned to their previous lows.

Cronos (CRO) is in a downtrend and has fallen sharply into oversold territory. The cryptocurrency has been declining since reaching a high of $0.77. At the time of writing, CRO has fallen to a low of $0.065. The rejection of the $0.13 high led to the current slump. Meanwhile, CRO reversed the downtrend that began on November 9, and a candlestick tested the 78.5% Fibonacci retracement level.

After the correction, CRO will fall to the $0.066 level of the 1.272 Fibonacci extensions. The daily stochastic is below the level of 20, and the coin has entered the oversold zone. CRO is the cryptocurrency with the worst performance this week. It has the following characteristics: 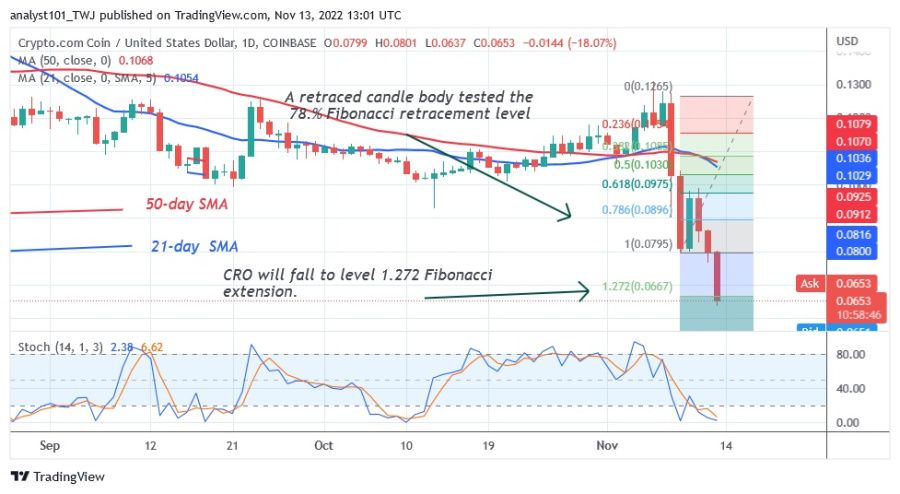 Aptos (APT) is in a downtrend as the altcoin falls below its moving average lines. On October 23, the cost of the digital asset reached a high of $10. At the time of writing, the altcoin has fallen to a low of $3.46. While APT is undergoing an upward correction that was rejected at the $6.00 high, existing support continues to hold. The moving average lines are below the cryptocurrency, which is moving sideways. The Relative Strength Index period 14 for the altcoin is at level 37, and it could continue to decline. The Coin showed the second worst performance this week. It has the following characteristics: 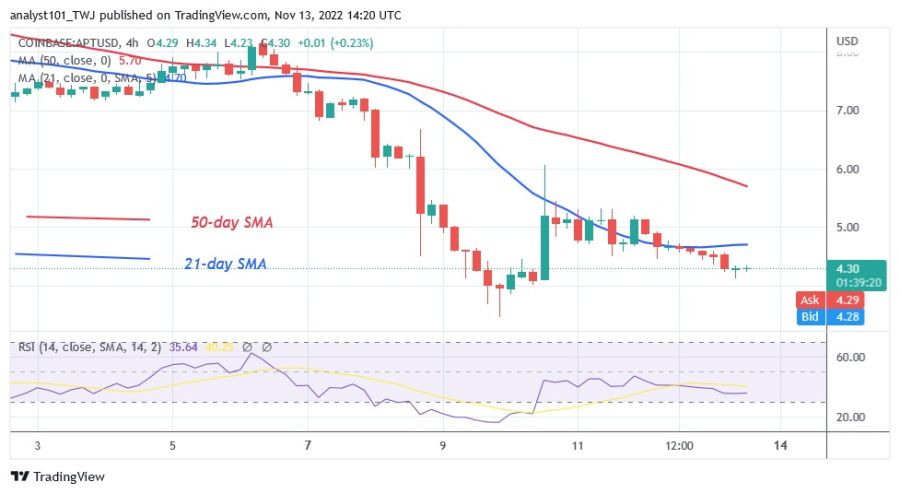 Huobi Token (HT) is moving sideways while fluctuating below the $40 resistance level. The cryptocurrency rallied on November 10 and climbed to a high of $69. However, the uptrend was short-lived as it abruptly reversed above the $40 resistance level. With today’s high of $40, further upside is limited. HT is currently falling and approaching its previous low of $10. On the downside, bullish momentum will pick up again as the price declines and finds resistance above the moving average lines. As HT is at level 63 of the Relative Strength Index of period 14, it still has a lot of room to go up. Among cryptocurrencies, it has the third worst weekly performance. HT has the following characteristics: 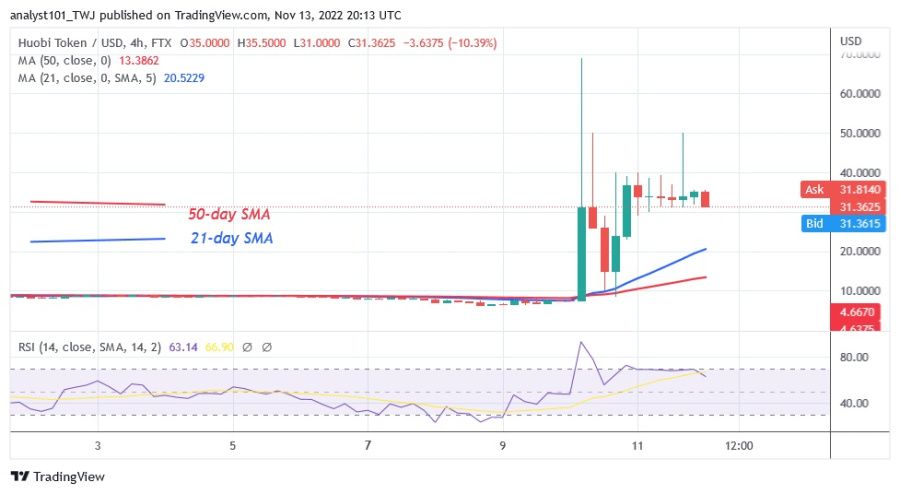 ApeCoin (APE) price, which has entered the oversold area of the market, is in a downturn and has fallen dramatically. The altcoin is currently falling due to its rejection. APE has made an upward correction on the November 9 downtrend and a candlestick has tested the 78.6% retracement line. After the correction, APE will decline but turn around at the 1.272 level of the Fibonacci sequence or $2.16.

Compared to the daily stochastics, the altcoin has fallen below the level of 20 and entered the oversold zone. The market has reached its limit of bearishness. It showed the fourth worst weekly performance with the following characteristics: 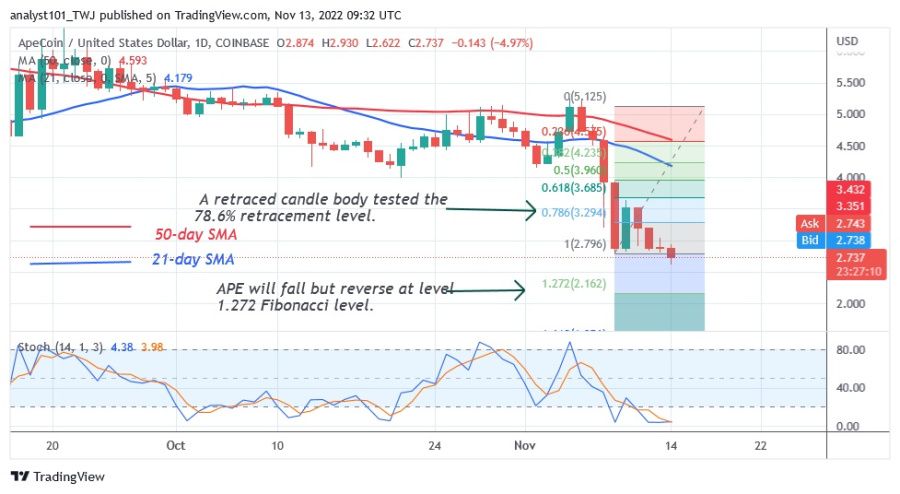 Near Protocol (NEAR) was in a downtrend and experienced a sharp decline after a bearish double top formed in March. The altcoin began to correct to the upside after sliding below the moving average lines. The decline resulted from the inability of buyers to keep the price above the 50-day line SMA. Due to its rejection, the cryptocurrency asset is currently declining.

NEAR took an upward correction in November and a candlestick tested the 78.6% retracement. After the correction, NEAR will decline but turn around the Fibonacci level of $1.272 and $1.54, respectively. Compared to the daily stochastic, NEAR has fallen below the level of 20 and entered the oversold zone. NEAR is the fifth worst performer of the week. It has the following characteristics: 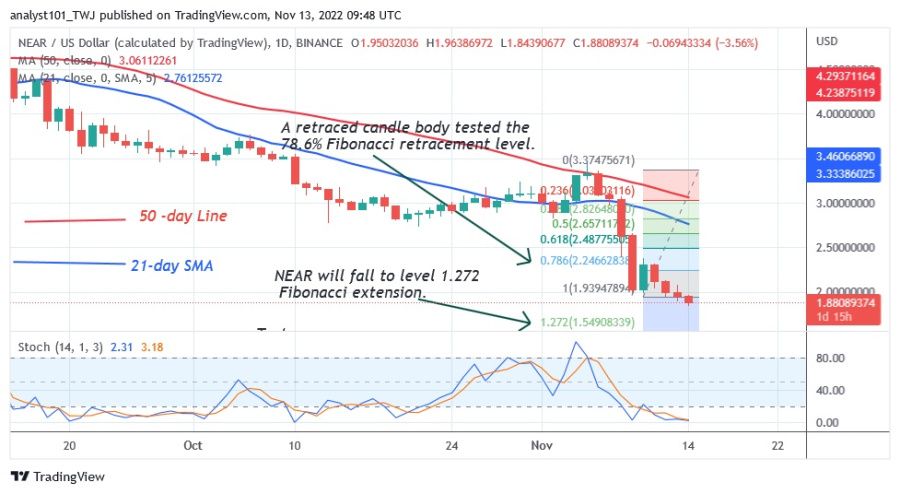 Bitcoin Is Falling, But Mining Is At Record Levels

The Great Delisting: Why Crypto Exchanges Are Dropping Assets 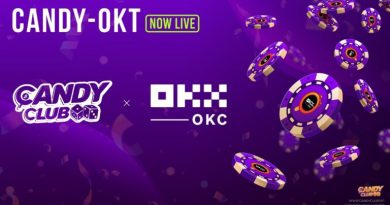