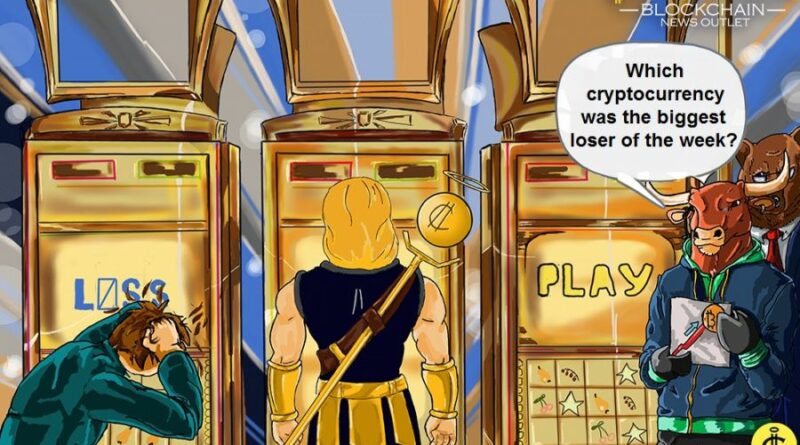 Altcoins are struggling to recover from the downtrend. Pullbacks at recent highs have caused altcoins to fall below their moving averages.

CoinIdol, a world blockchain news outlet, has compiled a list of cryptocurrencies that have shown the weakest performance over the past 7 days.

Kadena (KDA) has been in a downward trend. The cryptocurrency has been in a downtrend since December 27. The altcoin has fallen from a high of $17 to a low of $10.75. Kadena is the first big loser of the past week.

Today, Kadena has risen back above the $11 support and reached the high of $12.45. The uptrend should continue if the price breaks above the moving averages. The market will rise to regain the previous high of $17.

In the downtrend from December 30, a candlestick tested the 78.6% Fibonacci retracement level. The retracement suggests that Kadena will fall to the Fibonacci extension level of 1.272 or $10.44. The cryptocurrency has reversed at the $10.79 price level. Kadena has the following characteristics: 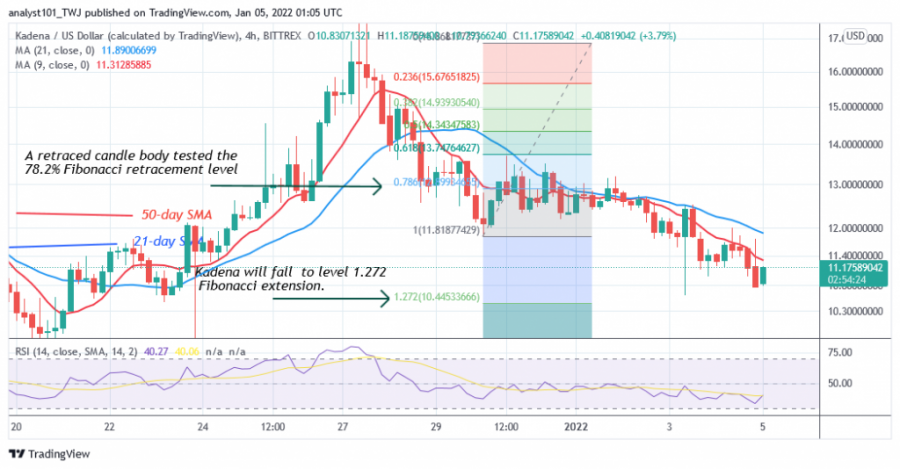 MIOTA (IOTA) has been in a sideways trend. The cryptocurrency was previously in a short uptrend when it reached a high of $2.00. The recent high was an overbought region of the market. As a result, the altcoin fell back sharply to a low of $1.00 and was once again trading in a range.

IOTA/USD is now fluctuating between $1.00 and $1.60, and today the altcoin is falling into the lower price range after being rejected from the recent high. The cryptocurrency will resume its trend when the range bound levels are broken. The altcoin was the second biggest loser of the past week. Below are the characteristics of MIOTA: 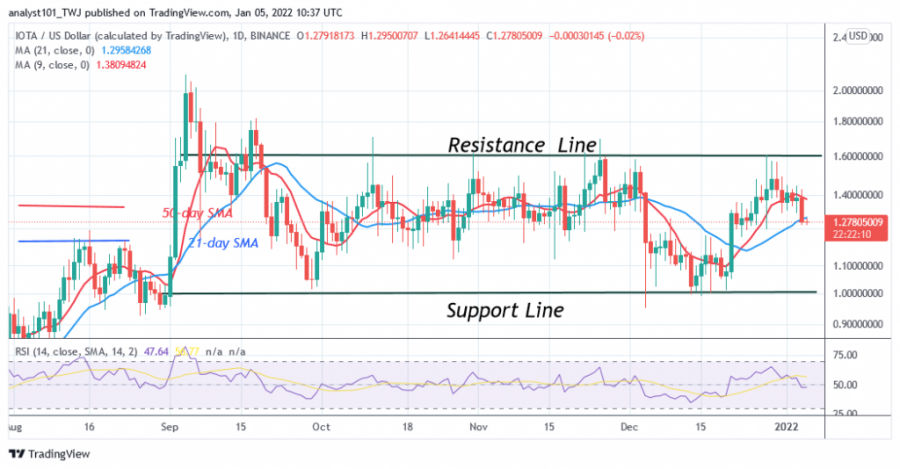 Gala (GALA) is in a downtrend. The cryptocurrency has been in a downtrend since November 26. The bears have crossed below the moving averages, indicating a further downward movement.

In the downtrend from December 6, a retracement candlestick has tested the 61.8% Fibonacci retracement level. The retracement suggests that GALA will fall to the 1.618 Fibonacci extension level, or $0.21. The altcoin was the third biggest loser in the previous week. Gala has the following characteristics. 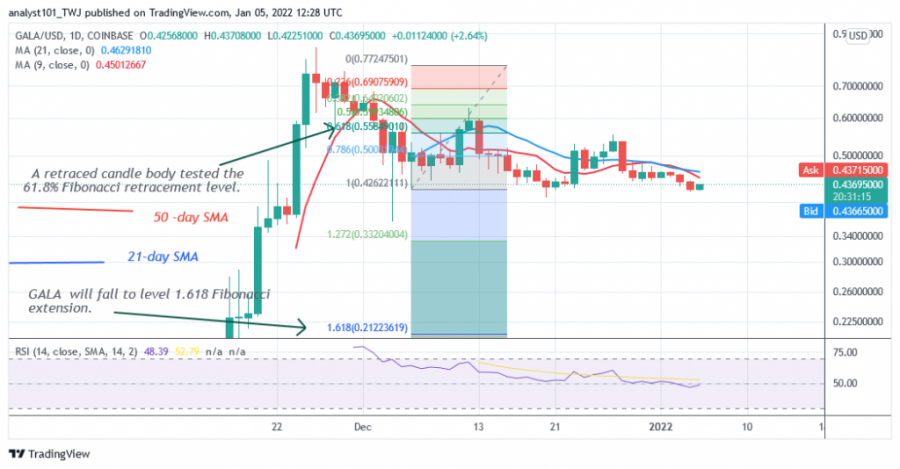 SushiSwap (SUSHI) has been in a sideways trend. The cryptocurrency was previously in an uptrend when it peaked at $22. The recent high was an overbought region of the market that brought the altcoin down.

Today, the altcoin has recovered as the price fluctuates between the moving averages. However, the uptrend is encountering resistance at the 21-day moving average. A break above the moving averages will end the downward correction. SUSHI was the fourth biggest loser last week. These are some of its characteristics: 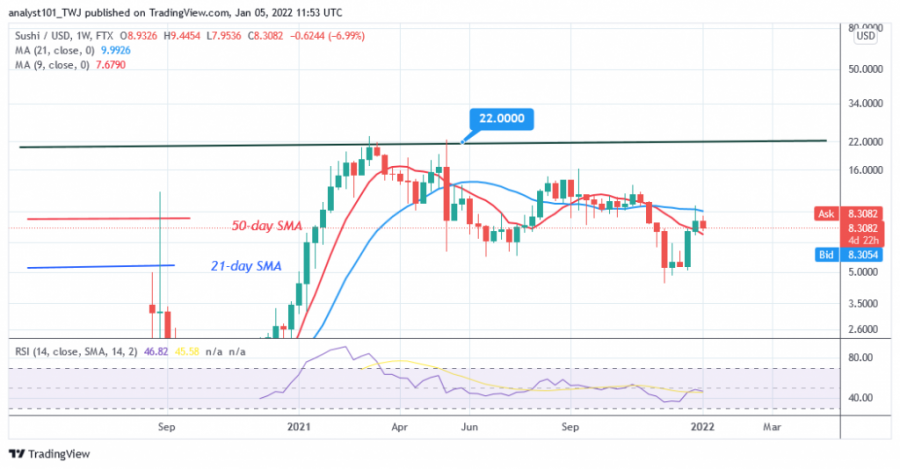 Sandbox was the fifth biggest loser last week. The cryptocurrency has the following characteristics: 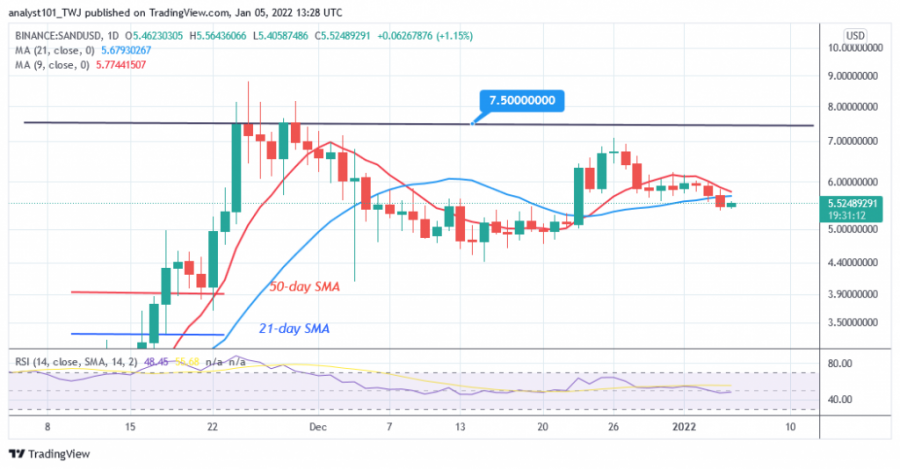 Disclaimer. This analysis and forecast are the personal opinions of the author and are not a recommendation to buy or sell cryptocurrency and should not be viewed as an endorsement by Coin Idol. Readers should do their own research before investing funds.

What Is Uniswap? Introduction to UNI Token