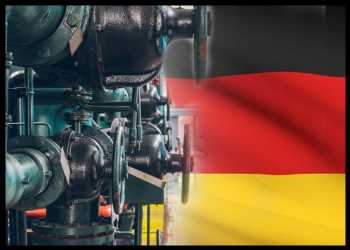 This was the biggest fall since April 2020, when output was down 18.2 percent.

Compared with February 2020, the month before restrictions were imposed due to the corona pandemic, production was 9.0 percent lower in August.

On a yearly basis, industrial production gained 1.7 percent after rising 6 percent a month ago.

Excluding energy and construction, industrial production was down 4.7 percent. Producers continue to report about the production being constrained by a shortage of supply of intermediate products.

Within industry, the production of capital goods showed a decrease of 7.8 percent.

The outlook for the industrial economy as a whole has thus deteriorated somewhat recently, but remains cautiously optimistic for the coming months in view of the continued high demand, the economy ministry. Output in the construction industry remained at a high level.

With conditions having worsened since February 2020, Germany’s manufacturing problems threaten to keep overall economic activity well below its pre-pandemic level until next year, Andrew Kenningham, an economist at Capital Economics, said.