Jerome Powell didn’t quite blow up the markets last Friday but he certainly curbed the financial markets’ recent enthusiasm.

There was an abrupt recalibration of expectations and a big sell-off on Wall Street after the Federal Reserve Board chairman’s speech at the annual Jackson Hole conference of central bankers, economists, academics and policymakers, as investors responded to the unequivocally “hawkish” tone of Powell’s address.

In a marked contrast to his speech at the same conference a year earlier, when he characterised surging inflation in the US as transitory and confined to a relatively narrow range of pandemic-affected goods that he said would “wash out over time”, Powell now says that restoring price stability – getting the inflation rate down from 40-year highs to the Fed’s target of about 2 per cent – will likely require maintaining a restrictive policy stance for some time. 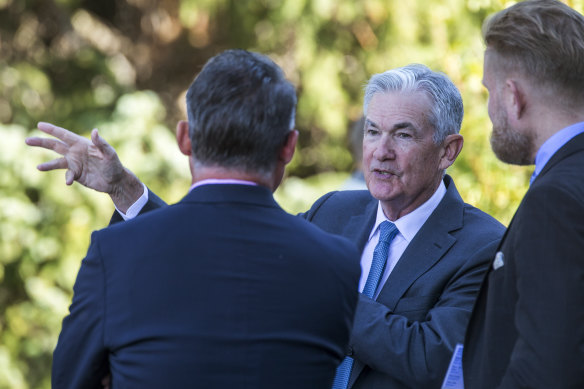 He said reducing inflation was likely to require a sustained period of below-trend growth and some softening of labour market conditions and would bring “some pain” to households and businesses.

While he didn’t channel Mario Draghi’s “whatever it takes” moment — although arguably he should have – he got as close to it as he could when he said the Fed’s responsibility to deliver price stability was “unconditional”.

Powell’s hand has been forced – he has had to adopt a more aggressive tone – because the Fed’s mixed signals had allowed financial markets to anticipate a soft landing for the US economy. Investors had priced in a scenario where US interest rates peaked in the first half of next year and then fell back as the Fed started cutting them.

That was entrenching expectations, in the markets and community, that the Fed would tolerate inflation at levels materially above its target in a trade-off between inflation and economic growth and employment.

The unusual drivers of the global outbreak of inflation at levels not seen since the 1970s, however, makes it likely that the Fed will have to raise rates to levels the markets definitely weren’t pricing in and keep them there for a lot longer than investors expected if it is to drive the inflation rate down.

While consumer demand in the US is strong, fed by the profligate response by the Trump and Biden administrations (and the Fed itself) to a once-in-a-century pandemic, the larger forces behind the soaring inflation rates are on the supply side. 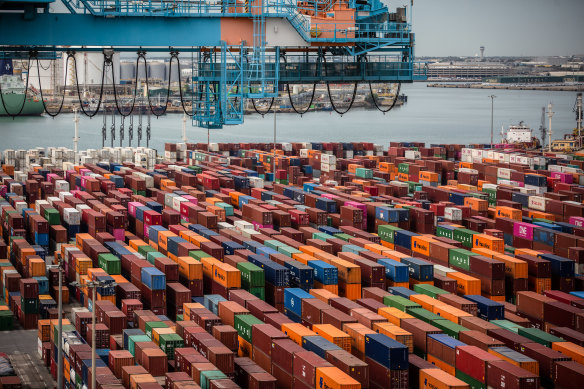 There are signs that the global supply chain dysfunction that has been a key driver in global inflation rates rising to levels not seen in decades is easing.Credit:Bloomberg

The pandemic has disrupted global supply chains, with some of those changes appearing structural and permanent, as governments and businesses have responded to the vulnerabilities COVID-19 exposed.

Pre-pandemic, China’s rise and its dominance of consumer goods in particular, built on low labour costs and in an increasingly globalised trade environment, had been a major factor in several decades of unusually low inflation.

China’s singular and ineffective response to outbreaks of COVID and the start of a decoupling of the US and Chinese economies, as geopolitical tensions rise, have added to both the supply chain issues and the structural changes occurring in global trade.

Then, of course, there has been the Russian invasion of Ukraine and its dramatic impacts on global energy and food markets, some of which are likely to be permanent. Europe won’t allow itself to become dependent on Russian energy again.

US rates are going to have to be increased further, and remain at elevated levels longer.

Even as Powell delivered last year’s address it was obvious the Fed was being too complacent and was misreading the nature of the inflationary spiral. Subsequent events have compounded the damage of that misjudgment and the Fed’s belated recognition of its mistakes have come too late to prevent the US inflation rate from peaking above 9 per cent.

That means, and it seems Powell and his colleagues now accept, US rates are going to have to be increased further, and remain at elevated levels longer, than might otherwise be the case even if that leads to a rise in unemployment or a full-blown recession.

Given the bluntness of monetary policy tools – interest rates and the availability of credit — the Fed is going to have to clobber demand to bring it into line with the reduced supply.

Powell on Friday referred to the US experience in the early 1980s when, after a number of half-hearted attempts by the Fed to lower inflation that soared after the oil shocks in the 1970s, Paul Volcker drove the Fed’s policy rate up to almost 20 per cent.

He engineered a recession during which US unemployment peaked in double-digits before the inflation rate, and unemployment rate, began trending down and ushered in decades of low inflation.

“Our aim is to avoid that outcome by acting with resolve now,” Powell said at Jackson Hole.

“We are taking forceful and rapid steps to moderate demand so that it comes into better alignment with supply and to keep inflation expectations anchored. We will keep at it until we are confident the job is done”.

His comments drove a 3.4 per cent fall in the S&P 500 index and a 3.94 per cent slump in the tech-heavy Nasdaq index and therefore could be interpreted as being successful in forcing investors to reconsider their expectations of a soft landing for the USA economy next year.

Investors, however, don’t appear to have fully bought the narrative that the Fed will keep rates higher for longer regardless of the consequences for the economy and markets. The sharemarket is now about 5.7 per cent off its peak this month (and this year) but is still about 10 per cent above its starting point this year.

Investors are still relatively optimistic about the prospect of avoiding recession and rate cuts in the second half of next year, which is not what the Fed wants if it is to deflate expectations of inflation and convince market participants that it won’t blink if they stage a tantrum against rising rates and shrinking liquidity.

The Fed will, of course, have to follow through on its newly adopted hawkishness if it, and Powell, are to regain the credibility they lost with their misreading of events last year.

“Our decision at the September meeting will depend on the totality of the incoming data and the evolving outlook,” Powell said on Friday, adding that “at some point, as the stance of monetary policy tightens further, it likely will become appropriate to slow the pace of increases”.

There are some signs that global supply chains have improved and that the US inflation rate has peaked – it fell back from 9.1 per cent in June to 8.5 per cent in July. That’s still, however, a long way from the Fed’s target of around two per cent.

If Powell and the Fed hold their nerves, there will be significant pain for US businesses and households – and for economies and markets outside the US, given the role that US rates and the US dollar play in the global financial system – before the Fed can be confident it has US inflation finally and firmly, if belatedly, under control.

Barr chides Trump, saying his tweets ‘make it impossible for me to do my job’