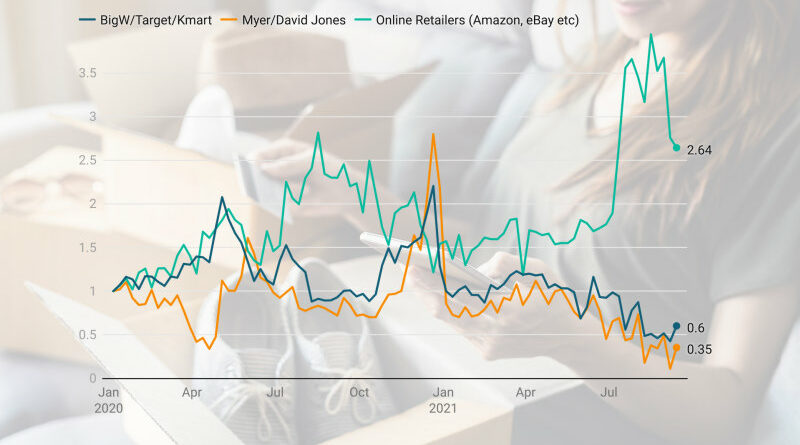 Consumers in Sydney and Melbourne have ramped up spending at ‘pure play’ digital retailers such as Amazon and eBay during the 2021 lockdowns, leaving traditional bricks and mortar department stores with declining sales despite their ability to offer online shopping.

A real-time spending tracker showed eBay had been among the biggest winners, with purchases in Australia’s two biggest cities soaring 310 per cent over normal levels.

Spending by Sydney and Melbourne consumers at Amazon during the outbreak was 122 per cent above normal, a peak far higher than during last year’s lockdowns.

But the tracker, developed by consultancy Accenture and credit bureau illion, showed department stores struggled to maintain market share during the most recent lockdown, with purchases at David Jones, Kmart, Big W and Myer all well below normal in the two cities.

Spending at Bunnings has increased in Sydney and Melbourne during both lockdown periods but the peak in 2021 has been well below that reached during last year’s nationwide lockdown.

Accenture Managing Director Andrew Charlton said the combination of strong consumer demand for online purchasing during lockdowns, along with improvements in the supply of online shopping options, had stoked recent growth.

“There has been a massive scale-up in every part of the e-commerce system improving the delivery service,” he said. “There’s more capacity, more speed, better interface, lower costs and new business models.”

The spending tracker, which draws on anonymised weekly bank transaction data of hundreds of thousands of customers, also showed strong growth in services delivered online, including streaming services and especially gambling. During lockdowns in early September, online gambling spending in Sydney and Melbourne was 329 per cent above the pre-COVID-19 norm. Consumers in the two cities have also spent much more on food delivery, alcohol, pets and consumer electronics during the 2021 lockdown, the tracker showed.

“People want to spend their money, but we’ve found that has shifted to strong online platforms that specialise in online experiences,” he said.

“The surge in pure play online spending is definitely one to watch as we come out of lockdown,” he said. “There is no doubt that players like eBay and Amazon have built exceptional marketplaces online at the expense of bricks and mortar shops. What will be most interesting to look for is whether this consumer behaviour has created a shift to online spending even when retail opens up again.”

The tracker also showed spending had weakened at traditional department stores during the 2021 lockdowns in Sydney and Melbourne.

Spending at Myer had fallen to be 50 per cent below normal during the latest lockdown, but that is an improvement on its position during last year’s lockdowns when spending slumped by 61 per cent.

For David Jones, the disruptions of 2021 had been more severe than last year. Spending was 68 per cent lower than normal during this year’s lockdown compared with a 21 per cent drop during last year’s.

During the last lockdown, spending at Big W rose to 42 per cent higher than normal, but that was reversed in the 2021 lockdown with spending 39 per cent below the norm. It is a similar story at Kmart – spending was 31 per cent above normal levels in last year’s lockdown but down by 47 per cent during this year’s.

Stay across the most crucial developments related to the pandemic with the Coronavirus Update. Sign up to receive the weekly newsletter.

King’s Hawaiian misleads about where its rolls are made, lawsuit claims