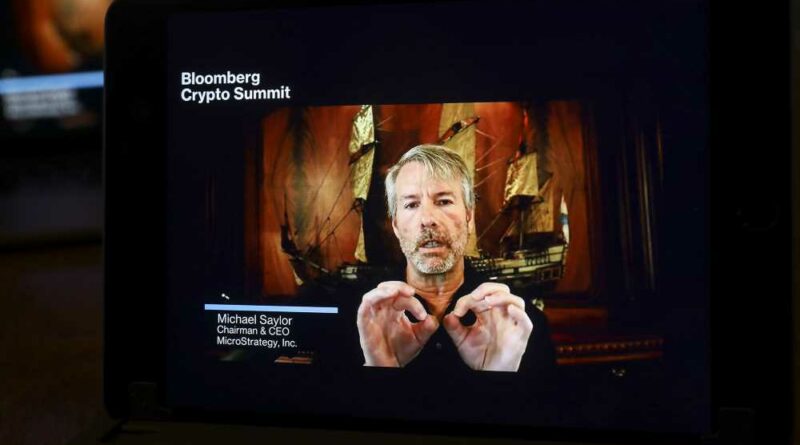 Saylor became a corporate crypto pioneer last year when his business-intelligence firm started buying up bitcoin with its cash reserves. Tesla followed his lead in February — less than two months after Saylor floated the idea to Musk on Twitter.

In a recent interview with Time magazine, Saylor said his online exchange with the world’s second-richest man may have gotten the ball rolling on Tesla’s decision to buy $1.5 billion worth of bitcoin, which he called an “inflection point” for the mainstream adoption of cryptocurrency.

“All of a sudden, the narrative goes from ‘Those crazy people, what are they thinking, speculating in Bitcoin?’ to ‘Maybe this is a real thing. This is probably not going away. Let’s try to figure out how to think about it,’” Saylor told Time in the interview published Sunday.

The fateful exchange started with a risqué meme Musk posted depicting bitcoin as a female seductress trying to lure a robed man averting his eyes to avoid temptation.

In response, Saylor said Musk should “do your shareholders a $100 billion favor” and convert his electric-car maker’s balance sheet from dollars into bitcoin.

Musk asked if such big transactions were even possible, prompting Saylor to offer to “share my playbook with you offline – from one rocket scientist to another.” Saylor studied aeronautics and astronautics at the Massachusetts Institute of Technology, and Musk is also CEO of the rocket-builder SpaceX.

When Time asked whether he thought the exchange had an impact on Tesla’s decision to buy bitcoin, Saylor simply replied, “Yes.” But he declined to say whether he spoke further with Musk because revealing such a discussion would be “against business etiquette.”

Tesla did not immediately respond to a request for comment Monday.

Bitcoin climbed to a record high after Tesla revealed its investment in early February and has continued to rise despite Musk suggesting its price appeared too high. The world’s biggest cryptocurrency was trading at $57,976.40 as of 7:23 a.m. Monday, up about 3 percent from a day earlier, according to CoinDesk.

In Saylor’s view, the handful of public companies that have invested in bitcoin since last year are just “the tip of the iceberg” for the digital coin’s institutional adoption. Other financial institutions such as Mastercard, BNY Mellon and Morgan Stanley have reportedly embraced cryptocurrency in recent months.

“Bitcoin is not speculation, OK?” Saylor told Time. “Bitcoin is a unique new technology, it’s like the Facebook of money or the Google of money.”

Monetary arsenal must be kept dry for use: Das