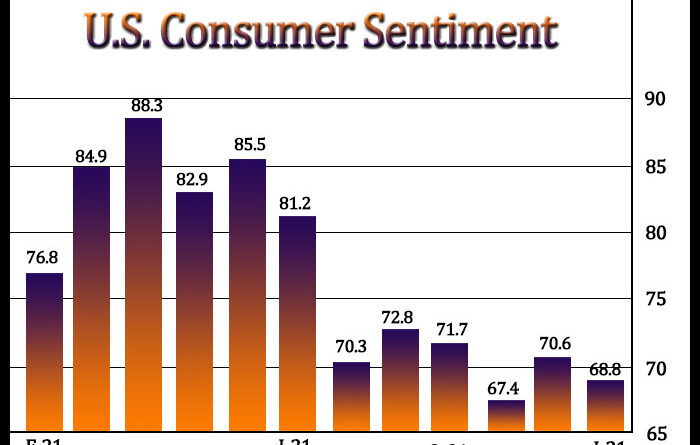 Inflation concerns have contributed to a bigger than expected drop in U.S. consumer sentiment in the month of January, according to preliminary data released by the University of Michigan on Friday.

The report showed the consumer sentiment index fell to 68.8 in January from 70.6 in December. Economist had expected the index to edge down to 70.0.

“While the Delta and Omicron variants certainly contributed to this downward shift, the decline was also due to an escalating inflation rate,” said Surveys of Consumers chief economist, Richard Curtin.

He added, “Three-quarters of consumers in early January ranked inflation, compared with unemployment, as the more serious problem facing the nation.”

The bigger than expected drop by the headline index came as the index of consumer expectations slid to 65.9 in January from 68.3 in December.

The report showed a more modest decrease by the current economic conditions index, which slipped to 73.2 in January from 74.2 in December.

What to expect from the Fed's meeting this week