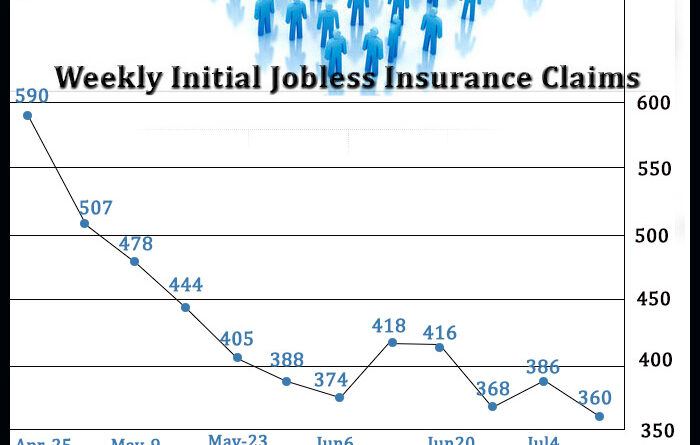 First-time claims for U.S. unemployment benefits decreased in line with economist estimates in the week ended July 10th, according to a report released by the Labor Department on Thursday.

Economists had expected jobless claims to dip to 360,000 from the 373,000 originally reported for the previous week.

With the decrease, initial jobless claims once again fell to their lowest level since hitting 256,000 in the week ended March 14, 2020.

The Labor Department said the less volatile four-week moving average also dropped to its lowest level in over a year, slipping by 14,500 to 382,500 from the previous week’s revised average of 397,000.

Continuing claims, a reading on the number of people receiving ongoing unemployment assistance, also slid by 126,000 to a pandemic-era low of 3.241 million in the week ended July 3rd.

Nancy Vanden Houten, Lead Economist at Oxford Economics noted sharp declines in claims in Texas and Georgia accounted for almost all the decrease in continuing claims.

“Claims in those two states, where top-off benefits ended June 26, fell to their lowest level since March 2020, suggesting the early end to benefits might be encouraging some people to return to work,” said Vanden Houten.