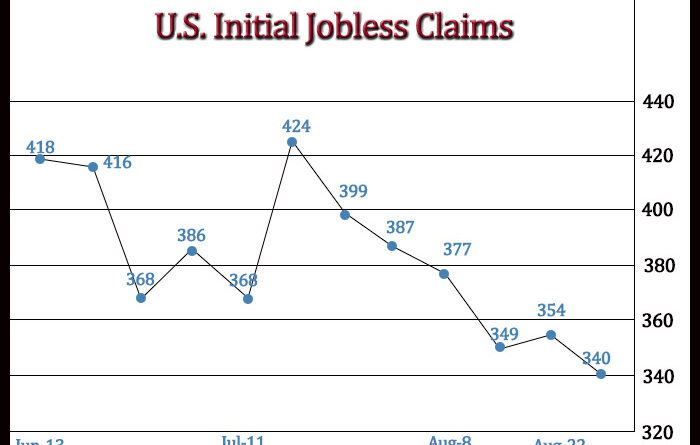 A day ahead of the release of the closely watched monthly jobs report, the Labor Department released a report on Thursday showing a modest decrease in first-time claims for U.S. unemployment benefits in the week ended August 28th.

Economists had expected initial jobless claims to edge down to 345,000 from the 353,000 originally reported for the previous week.

With the modest decrease, jobless claims once again fell to their lowest level since hitting 256,000 in the week ended March 14, 2020.

“We expect jobless claims to remain on a downward path, but there may be some interruptions if businesses and workers become more cautious because of the renewed spread of the coronavirus from the Delta variant,” said Nancy Vanden Houten, Lead Economist at Oxford Economics.

The Labor Department said the less volatile four-week moving average also fell to a pandemic-era low of 355,000, a decrease of 11,750 from the previous week’s revised average of 366,750.

Continuing claims, a reading on the number of people receiving ongoing unemployment assistance, also tumbled by 160,000 to 2.748 million in the week ended August 21st, falling to the lowest level in well over a year.

The four-week moving average of continuing claims also dropped to a more than one-year low, sliding by 58,000 to 2.855 million from the previous week’s revised average of 2.913 million.

On Friday, the Labor Department is scheduled to release its more closely watched report on the employment situation in the month of August.

Economists currently expect employment to jump by 750,000 jobs in August after surging by 943,000 jobs in July. The unemployment rate is expected to dip to 5.2 percent from 5.4 percent.

Fed holds steady even as it nods to ‘strengthened’ recovery

IRS releases new Form W-4: What to know to avoid a refund surprise in 2020