Over the past week, astute crypto market analysts noticed some interesting developments related to the supply of Ether (ETH) as the network’s August 4 London hard fork approaches.

Recent data from CryptoQuant, an on-chain analytics firm, indicates that the amount of Ether held in cryptocurrency exchanges’ reserves has hit new daily lows since the start of July.

To determine if this is a bullish or bearish development for the top altcoin, let’s take a closer look at some of the factors playing a role in the increased demand for Ether, including the Eth2.0 staking contract, increased activity in decentralized finance and traders’ possible excitement ahead of the implementation of Ethereum Improvement Proposal (EIP) 1559.

One source for the increased demand for Ether is the Eth2 staking contract which surpassed the 6 million Ether mark on June 30.

Data from CryptoQuant shows that July 1 saw the largest single-day outflow of Ether from exchanges since January 21 with more than 596,000 Ether pulled off exchanges.

The most recent data provided by Eth2 Launchpad indicates that the current amount staked is 6,166,661, which indicates that not all of the Ether withdrawn from exchanges went into staking.

Another possible destination for the Ether being taken off exchanges is the decentralized finance ecosystem which has seen increases in token values as well as the total value locked in DeFi protocols.

While Ether and Bitcoin (BTC) hold a lot of the value that is currently locked in DeFi, their prices have remained relatively unchanged over the past week, meaning the recent rise in TVL seen on July 8 may have been caused by rising token values as deposits have remained steady according to deposits and loan data provided by Dune Analytics.

Traders’ excitement grows ahead of the London hard fork

A third potential contributor to the recent flows seen in Ether is the upcoming London Hard Fork and the EIP-1559 proposal.

Several analysts expect the upgrade to positively impact Ether’s price due to the transition to a more eco-friendly proof-of-stake consensus mechanism as well as a new “scarcity” feature that will reduce the number of tokens in circulation.

Excitement about the upcoming hard fork is a possible source in the rise of ETH/BTC pair seen since June 27 as the price of Ether also rose in its USD pair. 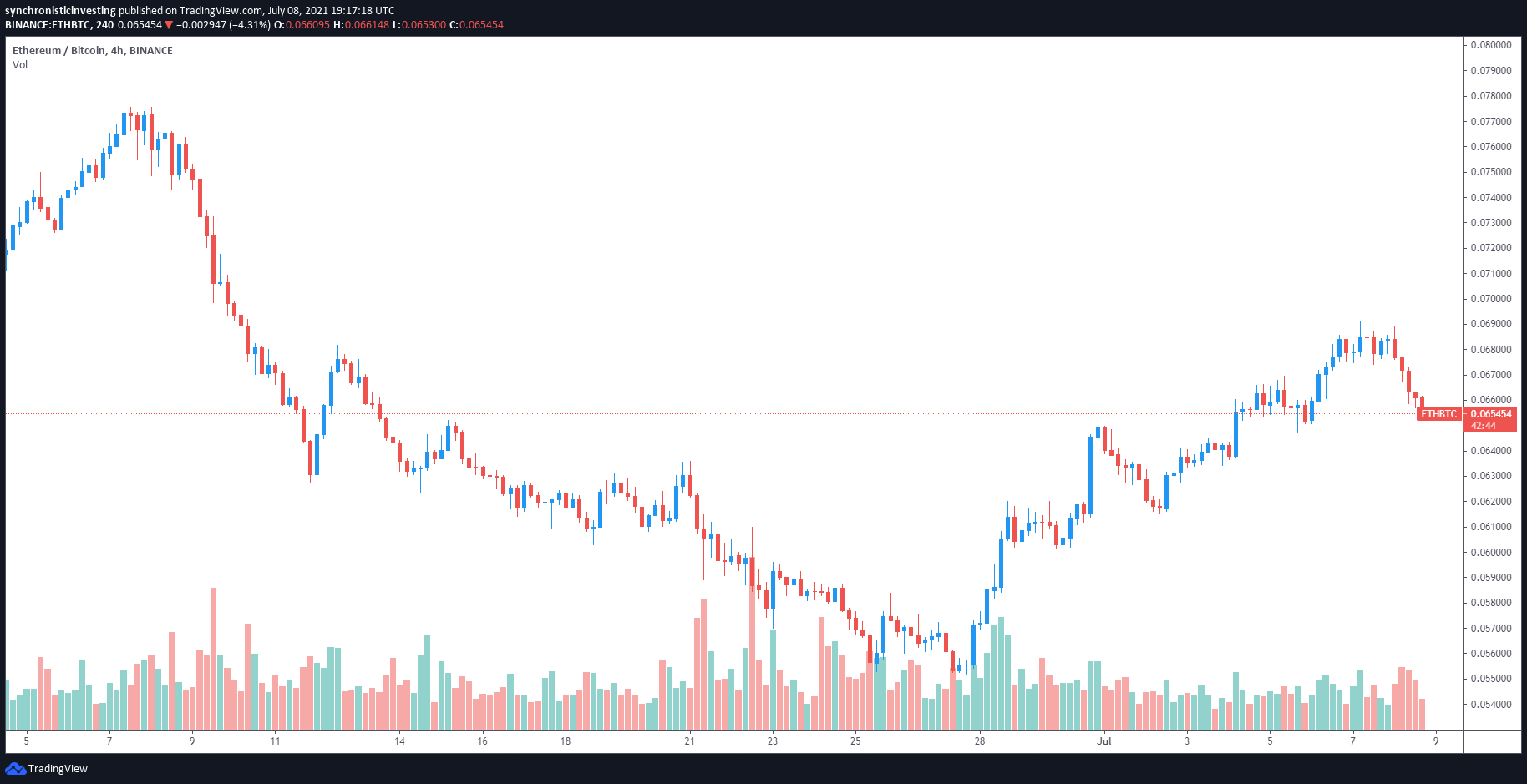 While Ether has outperformed Bticoin for a majority of the time since June 27, BTC’s performance during the market-wide pullback on July 8 is a sign that BTC remains the most resilient of the cryptocurrencies when market conditions are less than favorable.

From a long term perspective, however, the value proposition of Ether can’t be ignored and the battle between Ether and BTC is far from settled as recently discussed in a report from Goldman Sachs, which suggests that Ether will possibly surpass the total market capitalization of Bitcoin in the coming years.