A classic Bitcoin (BTC) on-chain indicator has seen a “hell of a bounce” even as price action stays uncertain.

In a tweet on July 9, Philip Swift, creator of analytics resource Look Into Bitcoin, highlighted a dramatic change of course for the Puell Multiple.

It has served extremely well as an indicator of when BTC price tops and bottoms are likely due, and in late June dipped into its green “buy” zone for only the fifth time in history.

Thanks in part to last weekend’s record difficulty readjustment, Swift says, Puell has now reversed upwards — and if it keeps going, higher prices should logically follow.

“Hell of a bounce out of the green zone this week for the Puell Multiple,” he summarized.

“Largely down to the difficulty adjustment and increase in hashrate. Will be a good sign if we see this and hashrate continue to climb quickly as bitcoin miners come back onboard.”

As Cointelegraph reported, miners returning to work after being displaced from China will create more competition and boost the Bitcoin hash rate, with difficulty climbing once again to account for the changes.

Estimates vary greatly as to when the turbulence impacting mining will be truly over. 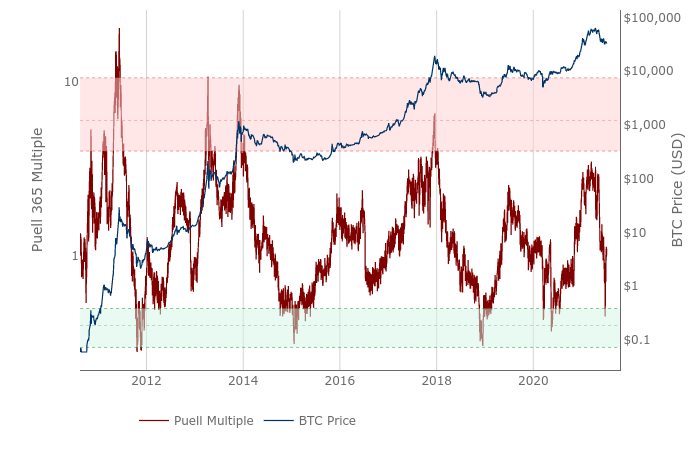 A reversal for Puell meanwhile could herald a definitive macro Bitcoin price floor. As trader and analyst Rekt Capital recently observed, dips into the green zone tend to be followed soon afterwards by a BTC/USD bottom.

The trip into the green itself occurs while Bitcoin is still preparing to put the bottom in, and does not completely line up with price behavior.

Bitcoin price action is seeing strength as the weekend progresses, something which could nonetheless result in a reversal in line with recent short-term trends.

The upcoming Grayscale unlocking events remain a topic of conversation, but opinions differ as to whether BTC/USD will be affected.

“This topic is the next big narrative,” trader Michael van de Poppe said in an update on Saturday, putting it alongside topics such as Bitcoin options expiries.

He added that negative bias is already active across crypto markets, which may give undue credence to the unlocking as a threat to price stability.

Much wow! The Dallas Mavericks to accept Dogecoin for tickets and merch