Home » Industries » Ready to discuss GST on fuel if States want it: FM 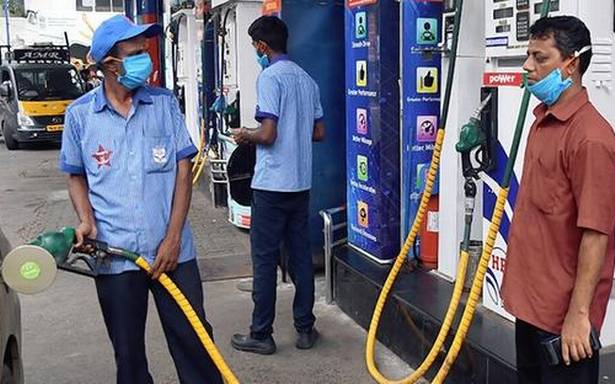 The Centre is ready to consider bringing fuel under the Goods and Services Tax regime if the States bring up the issue at the GST Council, Finance Minister Nirmala Sitharaman said on Tuesday, arguing that all decisions related to the indirect tax are driven by the Council and not the Ministry of Finance.

The Minister introduced 127 amendments to the Finance Bill, 2021, which was passed by the Lok Sabha. These included an income tax break for the proposed development finance institution to fund infrastructure and a tweak in the proposed tax provisions for employees’ provident fund (EPF) contributions.

Defending the decision to impose an Agriculture Infrastructure Development Fund Cess on several items including fuel in the Budget, Ms. Sitharaman said that the proceeds from the collections would be shared with the States as they were the ones in charge of farm infrastructure such as APMCs and marketing yards.

“The cess may not get devolved to States, but eventually it will be used for improving infrastructure in agriculture and the farm yards and the marketing yards, which are with the State governments and so the funds will have to go the States only,” the FM said.

The Minister also sought to assuage States’ concerns about a possible reduction in fund allocations owing to the Finance Commission’s recommendation to set up a non-lapsable Defence and Internal Security Modernisation Fund. “In principle, we have agreed to it. [But] the fear that it will be imposed on States is not well-founded at all. We have not yet taken a decision on this,” she said.

“In the Finance Bill, a few new proposals are being added of a minor nature,” the minister said.

The government has also introduced an amendment in the Budget proposal to tax income on employee contributions of more than ₹2.5 lakh a year into Provident Fund accounts.

“There is 1% of people who were going up to ₹5 crore contribution also. The ₹2.5 lakh [cap] covers 92%-93% of people,” the FM said. “Therefore, I don’t think this is going to affect most people for whom tax-free, assured income is provided under the scheme,” she added. “Through an amendment, I intend to raise this limit to ₹5 lakh in those cases, and only in those cases where there is no contribution by the employer in the EPF account,” Ms. Sitharaman said.

Responding to many MPs’ concerns about the high taxes on petrol and diesel and suggestions to bring them under the GST regime, Ms. Sitharaman said that both the Centre and States were taxing fuel and the Centre’s taxes had to be shared with the States.

“And if there is this concern, rightly, a concern about the fuel taxes. I would honestly think, many of the States would be watching this, and in the next GST Council, if that discussion comes up, I will be glad to have it on the agenda and discuss it. Let the States come and discuss it,” the minister said.

“Issues related to GST, being posed to Finance Minister, are not Finance Ministry matters,” she said. “They are GST Council matters in which all States are members. It’s a collective decision and without their clearance, things can’t happen,” Ms. Sitharaman pointed out.

Permanent Account Number (PAN) card holders failing to intimate their Aadhaar numbers to the Income Tax department on, or before a prescribed date, shall be liable to pay an Aadhaar intimation default fee of up to ₹1,000, as per amendments made to the Finance Bill.

Uncertainty may end shortly, will wait it out, says Sharath Vijayaraghavan