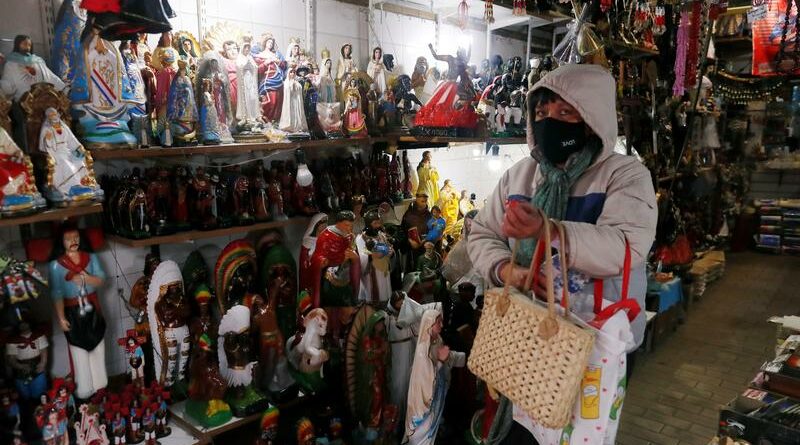 Markets
03/23/2021 Argen, Argentina, economy, GDP, US
FILE PHOTO: A woman shops at a store that sells Catholic religious items outside the church of San Cayetano (Saint Cajetan), the patron saint of labour and bread, during his feast day, amid the coronavirus disease (COVID-19) outbreak, in Buenos Aires, Argentina August 7, 2020. REUTERS/Agustin Marcarian

BUENOS AIRES (Reuters) -Argentina’s economy likely contracted 4.4% year-on-year in the fourth quarter of 2020, a Reuters poll of analysts indicated, the smallest decline in a year, as the country looks to rebound from the impact of the COVID-19 pandemic.

The poll of 10 local and international analysts showed that the South American nation’s economy fell 9.9% for the year, the third straight year of recession after it contracted 2.2% in 2019 and 2.5% in 2018.

“The end of last year was encouraging in terms of activity,” said Matias Rajnerman, chief economist at consultancy Ecolatina. Seasonally adjusted growth had been consistent recently even though some pandemic restrictions are still in place, Rajnerman said.

The quarterly decline was far milder than the collapse of 10.2% in the third quarter and a record contraction of a revised 19.1% in the second quarter last year, which was the toughest point of the COVID-19 restrictions in the country.

“The outlook for 2021 is encouraging. It will depend on the coronavirus cases and what lockdowns are needed whether that can be transformed into reality,” Rajnerman said.

“(The positive numbers) will be unsustainable beyond 2021,” he said, adding that Argentina’s economic and debt issues had led to a “decoupling” with the global economy.

The analysts polled by Reuters predicted a fourth-quarter contraction ranging from 4.1% to 4.6%. The government and economists forecast a 5% to 7% economic rebound this year, which should start to be seen from the second quarter.

RPT-Oysters Rockefeller or rotisserie chicken? The Fed is watching