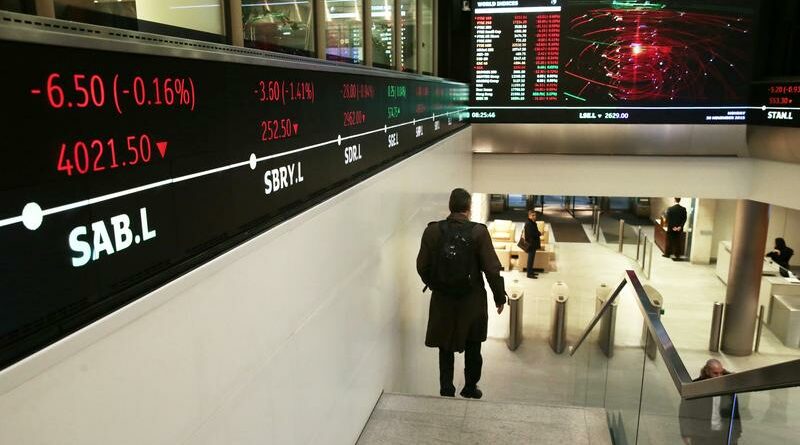 (Reuters) – London’s FTSE 100 index outshone its European rivals on Friday, boosted by earnings updates from AstraZeneca and Smurfit Kappa which help offset a slump in Barclays shares due to a cautious outlook despite profits beating expectations.

London’s blue chip index ended the session up 0.1% to secure a monthly gain of about 3.8%, the most since November, and bring a year-to-date rise to almost 8%.

The last day of trading in April saw U.S. and European benchmarks edge lower after reaching record highs this week on the back of an upbeat first-quarter earnings season.

The star performer in London was heavyweight AstraZeneca as better-than-expected results and a second half growth forecast lifted its shares 4.3% and buoyed the broader UK market.

The drugmaker said its COVID-19 vaccine sales were $275 million in the first-quarter and that it was on track to deliver 200 million doses a month from April.

“Despite the intense operational and political challenges created by AZN’s COVID-19 vaccine roll out, the core business continues to perform above market expectations in a most challenging quarter, demonstrating strength across therapeutic areas and geographies,” Citigroup analysts said in a note.

Another big winner on Friday was Smurfit Kappa. Europe’s largest paper packaging producer jumped 4.2% after it posted a 6% increase in first-quarter revenue on strong packaging demand.

Barclays posted by far the worst performance of the session, losing 7% despite beating expectations with January-March profit more than doubling to 2.4 billion pounds.

“A drop in investment banking earnings, lower revenues and a cautious outlook took the shine off a doubling in profits,” wrote Markets.com analyst Neil Wilson.

Though the equities trading business heavily outperformed, analysts highlighted the 35% drop in revenues from its fixed income, currencies and commodities, which was largely linked to tighter spreads and lower client activity.

After the U.S. Federal Reserve maintained a status quo on its monetary policy on Wednesday, investors’ focus has now turned towards Bank of England’s meeting on May 6 where it might ease its foot off the stimulus pedal and slow bond purchases as Britain’s economy rebounds.

In February, the BoE forecast the economy would grow 5% this year after slumping by almost 10% in 2020.

“The combination of a shallower Q1 contraction, faster exit from lockdown, a more supportive near-term fiscal policy, and a better external backdrop should see the Bank push up its 2021 projections closer to 7% from 5%,” wrote Deutsche Bank economist Sanjay Raja in a note.

Among other stocks, cybersecurity company Darktrace soared 32% in its trading debut.

Sterling falls as investors get jittery over Brexit