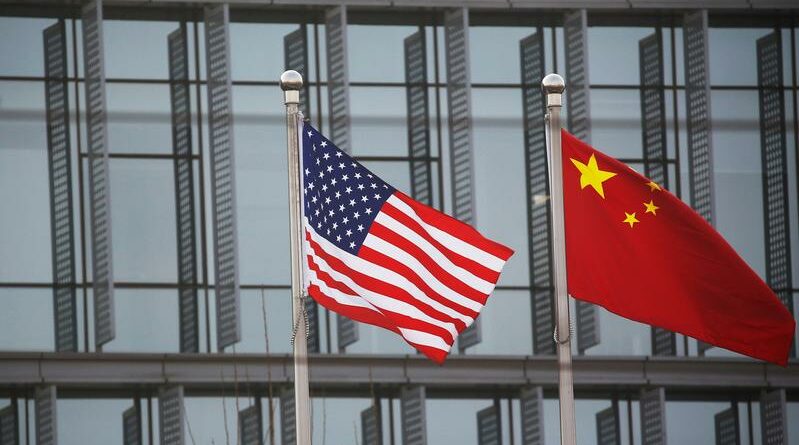 FILE PHOTO: Chinese and U.S. flags flutter outside the building of an American company in Beijing, China, January 21, 2021. REUTERS/Tingshu Wang

Neera Tanden, nominated to head the Office of Management and Budget, or OMB, told senators she would work with Congress to shore up the security of U.S. supply chains and work with allies to put more pressure on Beijing to adhere to global trade rules.

“The bilateral relationship between China and the United States, in the last several years is one where China did not uphold … its end of the bargain,” Tanden said at her confirmation hearing before the Senate Homeland Security and Governmental Affairs Committee.

“It is vital that we ensure that China change course,” she said. “It is important that we marshal allies to put pressure on China to ensure that they have a fair trading system where American companies can truly compete against China.”

If confirmed as OMB director, as expected, Tanden would oversee the agency that acts as a gatekeeper for the $4 trillion federal budget and all fiscal and regulatory initiatives.

The White House is reviewing all policies of former President Donald Trump’s administration towards China, including a two-year interim trade deal signed by Trump in January 2020.

Given that Democrats control the Senate, Tanden can become the OMB’s director even if she wins no Republican support.

Tanden said bilateral trade ties had not been effective in changing China’s “mercantilist” approach and addressing its failure to abide by global trading rules, which she said were unfair to American companies and American workers.

Biden has pledged support for reforming the World Trade Organization, and has repeatedly said he plans to work with allies to address challenges posed by China.

She told the committee she shared concerns about threats to U.S. supply lines posed by Chinese products such as those of telecoms equipment maker Huawei, and would look carefully at federal procurement.

Asked if she viewed Chinese-owned video-sharing app TikTok as a security threat, Tanden said, “I think we should be concerned about any entity that takes information and shares its private technological information. To the extent TikTok is doing that, I would share that concern.”

Tanden also underscored the Biden administration’s focus on human rights, and said she was hopeful a new generation of leaders in Hong Kong were fighting for “basic human rights and basic human protections.”