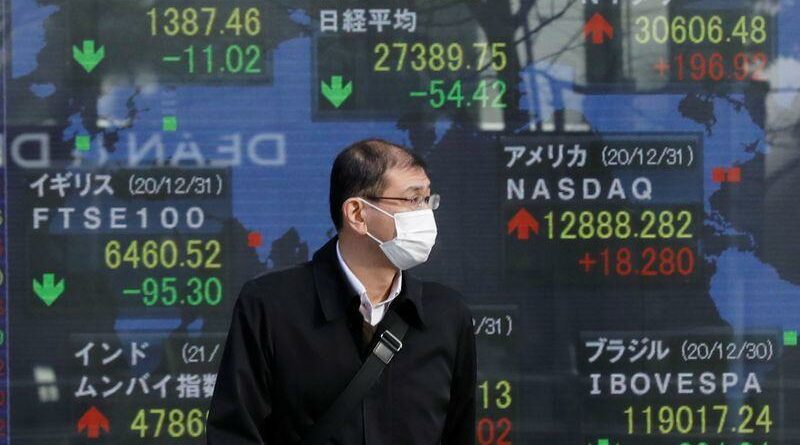 LONDON (Reuters) – Bonds dropped and stocks rose on Thursday as investors bet Democrat control of the U.S. Congress would enable President-elect Joe Biden to borrow and spend heavily, while a bruised dollar strained to recover from near-three year lows.

U.S. Treasuries extended their steepest selloff in months after Democratic Party victories in two Georgia races handed them narrow control of the Senate, bolstering Biden’s power to pass his agenda.

Europe’s Euro STOXX 600 gained 0.2%, with indexes in Frankfurt and Paris up 0.4% and 0.6% respectively. Growth-linked sectors from energy to miners rallied on the prospects of more U.S. stimulus, though UK shares turned negative.

The shocking images of the assault on American democracy had earlier knocked sentiment, though markets focused on the implications of Democrat control of Congress.

Earlier, MSCI’s broadest index of Asia-Pacific shares outside Japan had risen 0.4% and Japan’s Nikkei hit its highest since 1990.

“The market is saying the reflation trade is on,” said Justin Onuekwusi, portfolio manager at Legal & General Investment Management.

“The Democrat sweep means there will be more flexibility and speed to writing a fiscal check so a one-off U.S. fiscal boost as a bridge to a post-vaccine world is definitely on the cards.”

FILE PHOTO: A man wearing a facial mask, following the coronavirus disease (COVID-19) outbreak, stands in front of an electric board showing Nikkei (top in C) and other countries stock index outside a brokerage at a business district in Tokyo, Japan, January 4, 2021. REUTERS/Kim Kyung-Hoon

Wednesday’s bond sell-off pushed the yield on benchmark 10-year U.S. Treasuries, which rises when prices fall, over 1% for the first time since March. It rose as high as 1.0660% on Thursday before slipping back. [US/]

The Democrat victory reverberated in currency markets, too.

The dollar had sunk on the Georgia results to a near-three year low against a basket of six major currencies, with traders betting growing U.S. trade and budget deficits would weigh on a greenback already bruised.

Against the euro it clawed away from an almost three-year low of $1.22, and also languished near recent multi-year troughs against the Aussie, kiwi and Swiss franc.

“Higher Treasury yields should benefit the dollar against the euro and the yen,” said Masafumi Yamamoto, chief currency strategist at Mizuho Securities in Tokyo.

“However, the dollar will remain weaker against commodity currencies like the Aussie and emerging market currencies.”

Other risk-on assets climbed, with safe havens like the Japanese yen losing ground.

Copper, a barometer for global growth, gained 0.3% to hover near an 8-year high.

Oil prices held around a 10-month high, basking in the afterglow of a production cut promised by Saudi Arabia. Brent crude futures were flat at $54.25 a barrel.

The cryptocurrency has soared over a quarter already this month after almost quadrupling last year.

Exxon Mobil may shed $25B in assets

'It’s going to 30,000': A CIO who oversees $4.9 billion explains why the Dow is headed for fresh record highs — and shares his top 4 stock picks for the upswing