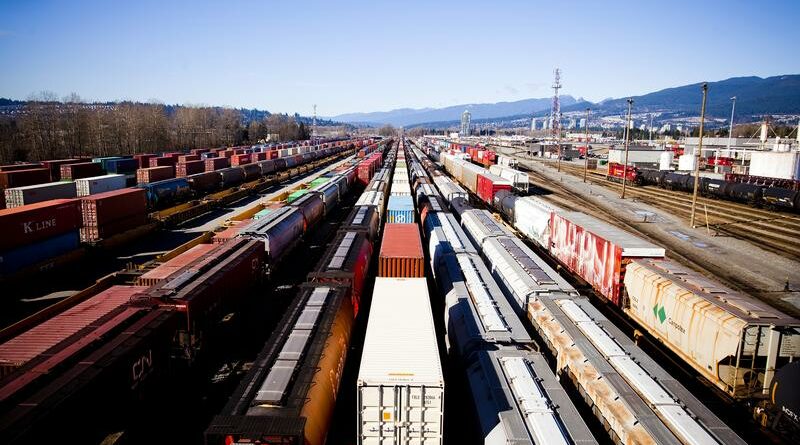 (Reuters) – Canadian Pacific Railway Ltd agreed on Sunday to acquire Kansas City Southern in a $25 billion cash-and-stock deal to create the first railway spanning the United States, Mexico and Canada, standing to benefit from a pick-up in trade.

It would be the largest ever combination of North American railways by transaction value. It comes amid a recovery in supply chains that were disrupted by the COVID-19 pandemic, and follows the ratification of the US-Mexico-Canada Agreement (USMCA) last year that removed the threat of trade tensions that had escalated under former U.S. President Donald Trump.

“Think about what we’ve gone through, think about the importance in North America of near-shoring that is occurring. This network uniquely provides a supply chain that allows our customers and our partners to actually benefit from that and leverage that opportunity,” Canadian Pacific Chief Executive Keith Creel told Reuters in an interview.

The combination needs the approval of the U.S. Surface Transportation Board (STB). The companies expressed confidence this would happen by the middle of 2022, given that the deal would unite the smallest of the seven so-called Class I railways in the United States, which meet in Kansas City and have no overlap in their routes. The combined railway would still be smaller than the remaining five Class I railways.

The STB updated its merger regulations in 2001 to introduce a requirement that Class I railways have to show a deal is in the public interest. Yet it provided an exemption to Kansas City Southern given its small size, potentially limiting the scrutiny that its acquisition will be subjected to.

“I don’t see it as the kind of consolidation that should raise concerns because it’s what you call an end-to-end or vertical merger. Their networks fit nicely with each other and help fill out North America with real service,” said economist Clifford Winston, a senior fellow at the Brookings Institution who specializes in the transportation sector.

An STB spokesman said the regulator had not yet received a filing from the companies, which would start its formal review process. He declined to comment further.

Still, Canadian Pacific agreed in its negotiations with Kansas City Southern to bear most of the risk of the deal not going through. It will buy Kansas City Southern shares and place them in an independent voting trust, insulating the acquisition target from its control until the STB clears the deal.

Were the STB to reject the combination, Canadian Pacific would have to sell the shares of Kansas City Southern, and one source close to the agreement suggested they could be divested to private equity firms or be relisted in the stock market. Kansas City Southern shareholders would keep their proceeds.

There is a $1 billion reverse breakup fee that Canadian Pacific would have to pay Kansas City Southern if it cannot complete the formation of the trust, the source added.

Kansas City Southern shareholders are expected to own 25% of Canadian Pacific’s outstanding common shares, the companies said. Canadian Pacific said it will issue 44.5 million shares and raise about $8.6 billion in debt to fund the transaction.

It is the top M&A deal announced thus far in 2021. While it is the biggest ever involving two rail companies, it ranks behind Berkshire Hathaway’s purchase of BNSF in 2010 for $26.4 billion. For a Factbox on the deal highlights see:

Creel will continue to serve as CEO of the combined company, which will be headquartered in Calgary, the companies said in a statement.

The companies also highlighted the environmental benefits of the deal, saying the new single-line routes that would be created by the combination will help shift trucks off crowded U.S. highways and cut emissions.

Rail is four times more fuel efficient than trucking, and one train can keep more than 300 trucks off public roads and produce 75% less greenhouse gas emissions, the companies said in the statement.

Calgary-based Canadian Pacific is Canada’s No. 2 railroad operator, behind Canadian National Railway Co Ltd, with a market value of $50.6 billion.

It owns and operates a transcontinental freight railway in Canada and the United States. Grain haulage is the company’s biggest revenue driver, accounting for about 58% of bulk revenue and about 24% of total freight revenue in 2020.

Kansas City Southern has domestic and international rail operations in North America, focused on the north-south freight corridor connecting commercial and industrial markets in the central United States with industrial cities in Mexico.

Canadian Pacific’s latest attempt to expand its U.S. business comes after it abandoned a hostile $28.4 billion bid for Norfolk Southern Corp in April 2016. Canadian Pacific’s merger negotiations with CSX Corp, which owns a large network across the eastern United States, failed in 2014.

Here are the stocks to buy if an all-out U.S.-China trade war erupts, says Goldman