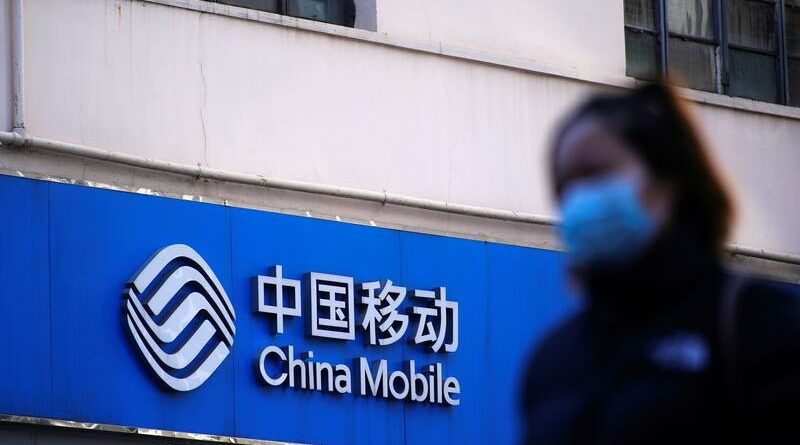 A sign of China Mobile is seen on a street, during the coronavirus disease (COVID-19) outbreak in Shanghai, China January 8, 2021. REUTERS/Aly Song

The deletions of China Mobile, China Telecom and China Unicom Hong Kong add to a raft of Chinese firms already dropped from indexes because of the ban and will force index tracking funds to sell their stock.

The firms have large numbers of passive investors and the announcements wiped a combined $5.6 billion off the value of their Hong Kong-traded shares on Friday.

“If you’re a passive index provider, of course, you need to get out of the way,” said Kay Van Petersen, global macro strategist at Saxo Capital Markets in Singapore.

“And obviously if you’re active and you know the index providers are going to have to get out of the way, you’re not going to just be sitting around while something is getting sold off.”

The index deletions stem from a November order from U.S. President Donald Trump, which bans Americans from investing in Chinese companies that the United States deems to have links with China’s military.

They also come on the heels of a decision by the New York Stock Exchange – after some flip-flopping – to delist the three firms’ U.S.-traded American Depositary Receipts on Jan. 11.

MSCI said it would remove the three companies from its China indexes on Jan. 8 and FTSE Russell said they would be cut from its Global Equity Index series and China A Inclusion indexes on Jan. 11.

China Telecom and China Unicom Hong Kong said in statements on Thursday they expected the NYSE delisting to hit their stock prices. China Mobile said it reserves its rights to protect its interests.

China’s foreign ministry said it firmly opposes what it called the United States’ abuse of its power to oppress Chinese companies.

The deletions and NYSE delistings came after the U.S. Treasury clarified the scope of the ban.

Fund managers say the market impact may be shortlived as non-U.S. investors are likely to step in and purchase the stocks.

Chipmaker SMIC, for example, has jumped more than 35% in two weeks despite being covered by the ban and removed from indexes.

But the potential for the ambit of the rules to widen has kept some investors nervous – particularly after news that the ban could be expanded to include tech giants Alibaba and Tencent.

China Mobile shares closed down 4% at their lowest level since 2006 and China Telecom shares dropped 3% to a 12-year low, while China Unicom finished down 0.9% after paring steep losses. All three stocks have shed more than 20% since Trump’s November order.