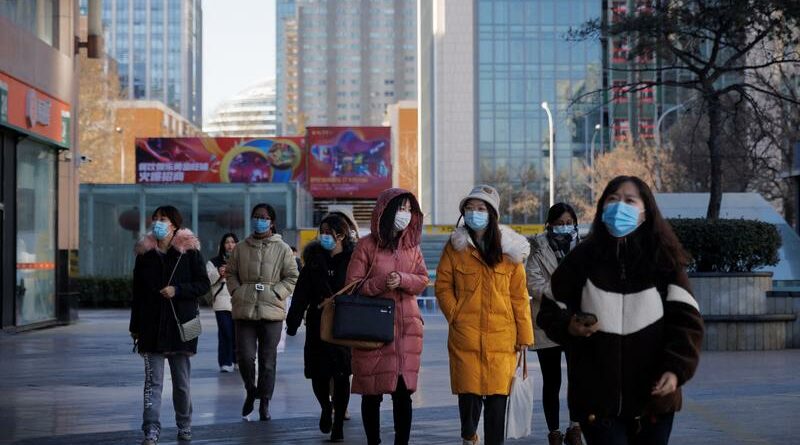 BEIJING (Reuters) – The Chinese capital Beijing on Saturday reported its first locally transmitted infection of the highly transmissible Omicron coronavirus variant, according to state media, just weeks ahead of its staging of the Olympic Winter Games.

State television reported on Saturday that the new infection had been identified as the Omicron strain.

Lab testing found “mutations specific to the Omicron variant” in the person, Pang Xinghuo, an official at the city’s disease control authority, told a news briefing.

Officials have sealed up the infected person’s residential compound and workplace, and collected 2,430 samples for testing from people linked to the two locations, a Haidian district official said.

The detection of the Omicron variant Beijing came as cities across the country ratchet up viral vigilance ahead of the Winter Olympics, due to start Feb. 4.

Authorities have also warned that Omicron adds to the increased risk of COVID-19 transmission as more people travel across the country and return to China from overseas for the Lunar New Year holiday starting at the end of the month.

Many local governments have advised residents not to leave town unnecessarily during the holiday, while dozens of international and domestic flights have been suspended.

Aside from Beijing, China has reported locally transmitted infections of the Omicron variant in at least four other provinces and municipalities — in the northern city of Tianjin, the central province of Henan, the southern province of Guangdong and the northeastern province of Liaoning. However, the total number Omicron cases remains unclear.

He Qinghua, an official at the National Health Commission (NHC), said in a briefing earlier on Saturday that the Omicron variant was also detected in Shanghai, without specifying the case count. He did not say whether the variant had been found locally or among travellers from overseas.

He said 14 provincial areas in China had found the Omicron variant in infected individuals arriving from overseas, without naming the regions.

In a statement on Saturday, the NHC reported 165 new confirmed coronavirus cases for Jan. 14, down from 201 a day earlier.

Of the new infections, 104 were locally transmitted, according to a statement by the National Health Commission, compared with 143 a day earlier.

The new locally transmitted cases were in Henan, Tianjin, Guangdong, Shaanxi and Zhejiang.

There were no new deaths, leaving the death toll at 4,636.