The U.S. Coast Guard said Saturday that cleanup crews are responding to a sizable oil spill in the Gulf of Mexico following Hurricane Ida.

The spill, which is ongoing, appears to be coming from a source underwater at an offshore drilling lease about two miles (three kilometers) south of Port Fourchon, Louisiana. The reported location is near the site of a miles-long brown and black oil slick visible in aerial photos first published Wednesday by The Associated Press.

So far, the growing spill appears to have remained out to sea and has not impacted the Louisiana shoreline. There is not yet any estimate for how much oil was in the water, but recent satellite images reviewed by AP on Saturday appeared to show the slick drifting more than a dozen miles (more than 19 kilometers) eastward along the Gulf coast.

Coast Guard spokesman Lt. John Edwards said response teams are monitoring reports and satellite imagery to determine the scope of the discharge. He said the source of the pollution is located in Bay Marchand, Block 4, and is believed to be crude oil from an undersea pipeline owned by Talos Energy.

Brian L. Grove, spokesman for the Houston-based energy company, said it had hired Clean Gulf Associates to respond to the spill even though the company believes it is not responsible for the oil in the water.

Clean Gulf Associates, a nonprofit oil-spill response cooperative that works with the energy exploration and production industry, responded to the scene Wednesday. Its workers have placed a containment boom in the area to mitigate further spread of the oil. The company's vessels are also running skimmers that can remove oil from the water, though the Coast Guard said only about 42 gallons (about 160 liters) had been removed so far. 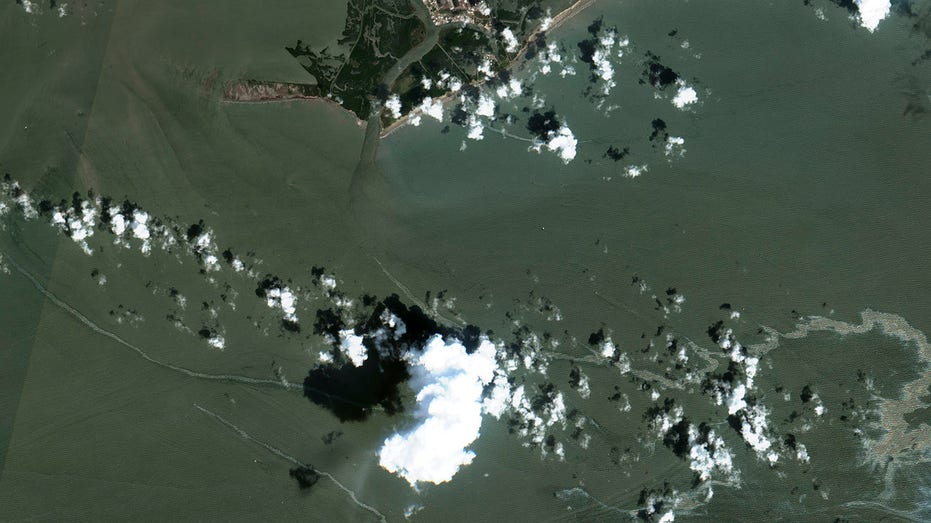 In a satellite image provided by Maxar Technologies, an oil slick is shown on Sept. 2, 2021 south of Port Fourchon, La. The U.S. Coast Guard said Saturday, Sept. 4, that cleanup crews are responding to a sizable oil spill in the Gulf of Mexico follow ( (Maxar Technologies via AP) / AP Newsroom)

Talos is investigating the cause of the leak, but a statement provided by Grove said that field observations indicate the company's assets are not the source. Talos previously leased Bay Marchand, Block 5, but ceased production there in 2017, plugged its wells and removed all pipeline infrastructure by 2019, according to the company.

Talos said two 95-foot (29-meter) response vessels had been dispatched to the scene to conduct oil recovery operations. A lift boat equipped to conduct dive operations has also been mobilized and is expected to arrive Saturday. The Coast Guard said the company had indicated divers would descend to the bottom on Sunday to determine the source of the leak.

HEADING INTO LABOR DAY WEEKEND, GAS PRICES ARE HIGHEST IN THESE STATES

"Talos will continue to work closely with the U.S. Coast Guard and other state and federal agencies to identify the source of the release and coordinate a successful response," the company's statement said. "The company’s top priorities are the safety of all personnel and the protection of the public and environment." 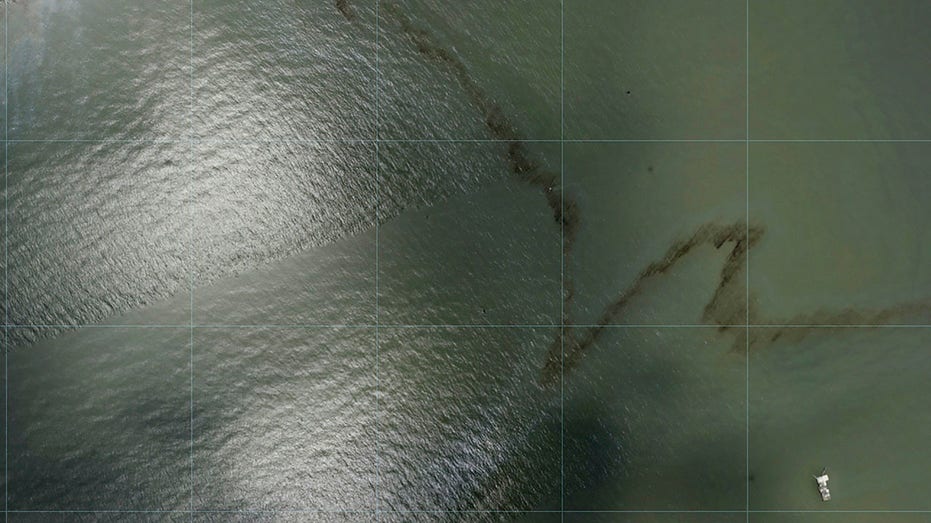 Photos captured by National Oceanic and Atmospheric Administration aircraft Tuesday, Aug. 31, 2021 and reviewed by The Associated Press show a miles long black slick floating in the Gulf of Mexico near a large rig marked with the name Enterprise Offs ( (NOAA via AP) / AP Newsroom)

The Bay Marchand spill is one of dozens of reported environmental hazards state and federal regulators are responding to in Lousiana and the Gulf following the Category 4 hurricane that made landfall at Port Fourchon on Sunday. The region is a major production center of the U.S. petrochemical industry.

The AP also first reported Wednesday on images from a National Atmospheric and Oceanic Survey that showed extensive flooding and what appeared to be petroleum in the water at the sprawling Phillips 66 Alliance Refinery located along the Mississippi River south of New Orleans.

After AP published the photos, the Environmental Protection Agency tasked a specially outfitted survey aircraft to fly over that refinery on Thursday, as well as other industrial sites in area hardest hit by the hurricane's 150-mph (240-kph) winds and storm surge.

The Louisiana Department of Environmental Quality said a state assessment team sent to the Alliance Refinery observed a spill of heavy oil being addressed with booms and absorbent pads. A levee meant to protect the plant had breached, allowing floodwaters to flow in during the storm and then back out as the surge receded.

State environmental officials said there was no estimate yet available for how much oil might have spilled from the refinery. 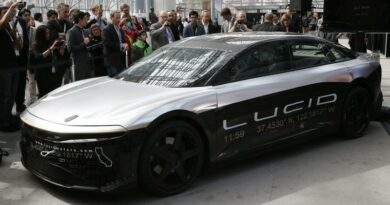