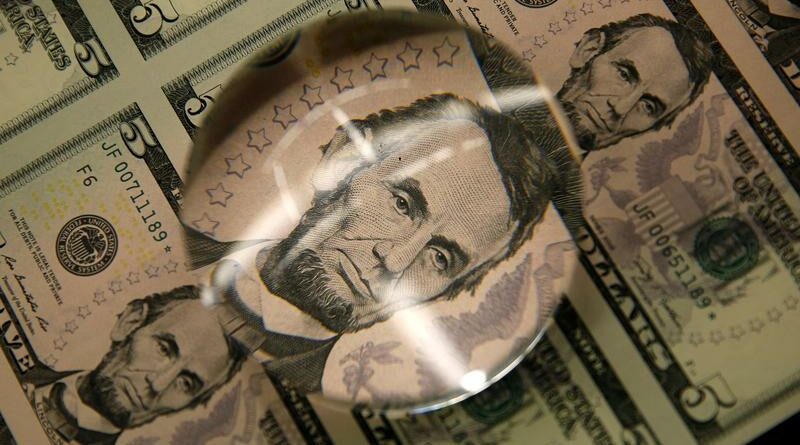 LONDON (Reuters) – The dollar edged higher on Tuesday, helped by a pick-up in U.S. Treasury yields, but was still near three-week lows as markets waited for inflation data in the United States.

FILE PHOTO: Sheets of former U.S. President Abraham Lincoln on the five-dollar bill currency are seen through a magnifying glass at the Bureau of Engraving and Printing in Washington March 26, 2015. REUTERS/Gary Cameron/File Photo

The dollar has fallen so far in April, after surging in the first three months of 2021 on expectations that a combination of monetary stimulus and government spending would cause inflation to spike.

Market participants will also be paying attention to how yields react to a 30-year Treasury auction.

ING strategists wrote in a note to clients that higher inflation would support higher U.S. yields, which could in turn cause the dollar to outperform lower-yielding currencies such as the yen, Swiss franc and euro.

The inflation data “should further fuel the narrative that the U.S. economy is starting to overheat and are to likely add to concerns that the Fed’s firmly dovish message will be increasingly challenged,” ING said.

“There’s a widespread expectation that inflation is set to rise in the coming months, but also a consensus for the most part that this will be a transitory phenomenon,” Deutsche Bank strategist Jim Reid wrote in a note.

Asian stock markets were broadly positive after the data, but the boost did little to support currency markets. By early London trading, China’s offshore yuan was down 0.1% against the dollar, changing hands at 6.5523.

The Australian dollar, which is seen as a liquid proxy for risk appetite, was down 0.2% versus the U.S. dollar at 0.7609.

On Monday, Australia abandoned its goal to vaccinate nearly all its population by the end of 2021.

The New Zealand dollar also fell, down 0.1%. The Reserve Bank of New Zealand is due to meet on Wednesday and is expected to keep rates constant.

The British pound was up 0.1% against the dollar at $1.3763. The UK economy grew in February as companies prepared for the lifting of the third coronavirus lockdown, gross domestic product data showed.

Elsewhere, bitcoin was up 1.6% at $60,807.77, ahead of Coinbase Global Inc, the largest U.S. cryptocurrency exchange, listing on the Nasdaq on Wednesday.

GRAPHIC-Markets in Q1: Riding a tiger and waking some bears