GraniteShares founder and CEO Will Rhind gives his take on dropping major investments.

The Dow Jones Industrial Average rose 158 points, or 0.45%, while the S&P 500 index and the Nasdaq Composite index advanced 0.24% and 0.12%, respectively. The early gains extended the record highs set by the Dow and the S&P on Tuesday.

The July consumer price index showed prices jumped 5.4% annually, matching June's reading for the fastest increase since August 2008. Prices were up 0.5% month over month, slowing from the 0.9% gain in June.

In stocks, cyclicals that would benefit from infrastructure spending, including Caterpillar Inc., Cleveland-Cliffs Inc. and Nucor Corp., continued to outperform.

Boeing Co. completed a test flight in China for its 737 Max jet, which has been grounded in the country for two and a half years. It is unknown when the aircraft will be allowed to return to service.

In deals, cybersecurity company NortonLifeLock Inc. agreed to buy London’s Avast Plc for as much as $8.6 billion in cash and stock. The deal, if closed, would form a cybersecurity behemoth that provides service for more than 500 million customers.

In earnings, crypto exchange Coinbase Global Inc. reported quarterly profit that exceeded Wall Street estimates as trading volumes surged 38% from a year ago. The company forecast a year-over-year decline in trading volumes for the current quarter.

In commodities, West Texas Intermediate crude oil slid 62 cents to $67.67 a barrel after the White House called on OPEC to increase production to support the economic recovery. Meanwhile, gold rose $15.40 to $1,747.10 an ounce. 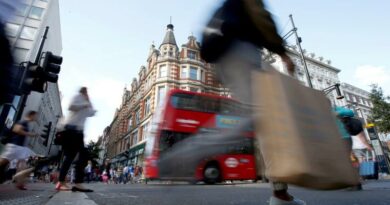