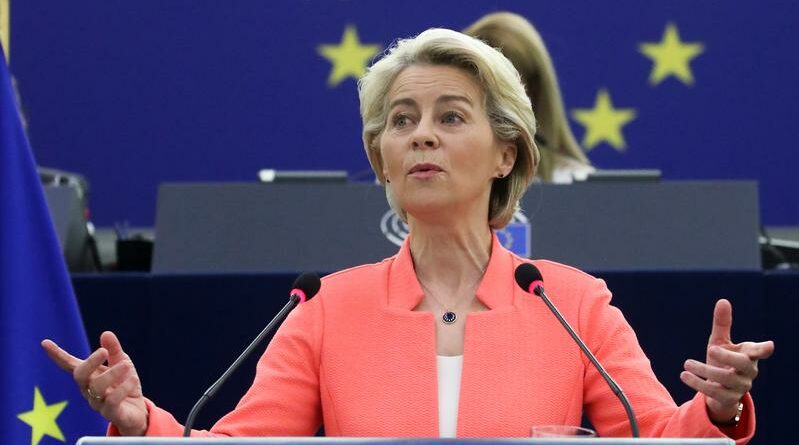 Markets
09/15/2021 commission, EU, EU In, US, Vaccine
European Commission President Ursula von der Leyen delivers a speech during a debate on “The State of the European Union” at the European Parliament in Strasbourg, France, September 15, 2021. REUTERS/Yves Herman

STRASBOURG (Reuters) -The European Union will donate a further 200 million COVID-19 vaccine doses to poorer countries and close gaps in its own vaccination coverage, the EU executive chief said on Wednesday.

Ursula von der Leyen told the European Parliament in a speech in Strasbourg that the EU’s first pandemic priority was to speed up global vaccination, given less than 1% of doses globally administered had been in low-income countries.

The European Commission, she said, will donate 200 million doses to low-income countries by the middle of next year, on top of 250 million doses already pledged.

The Commission president also said she saw “worrisome divergences” between the rates of vaccination in EU member states, adding that the bloc had secured 1.8 billion further vaccine doses to cover more initial and booster shots.

“Let’s do everything possible to ensure that this does not turn into a pandemic of the unvaccinated,” she said.

She proposed on Wednesday that the EU invest 50 billion euros ($59.1 billion) by 2027 to improve its preparedness and resilience to future health threats.

“To make sure that no virus will ever turn a local epidemic into a global pandemic. There is no better return on investment than that,” she said.