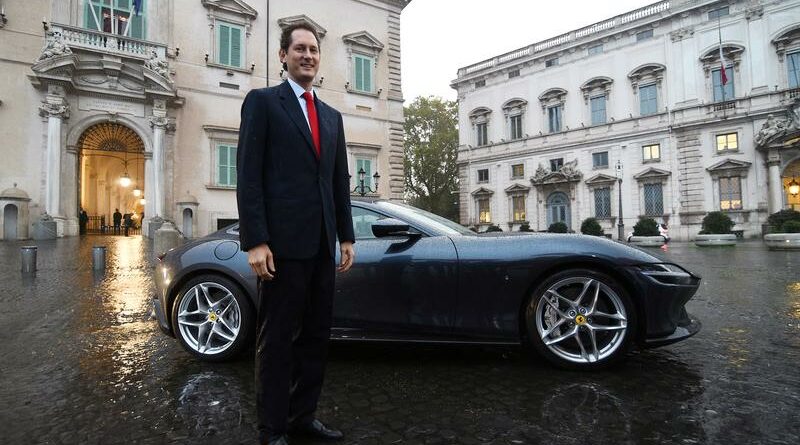 LONDON (Reuters) – John Elkann, scion of Italy’s Agnelli family, has been exploring a possible tie up with fashion designer Giorgio Armani as part of a plan to build a luxury conglomerate potentially anchored around Ferrari, five sources familiar with the matter told Reuters.

Elkann, who chairs Franco-Italian car group Stellantis, offered to buy a minority stake in the Milanese fashion house led by 87-year old Giorgio Armani, but his latest proposal was rebuffed earlier this month, two of the sources said, speaking on condition of anonymity.

The deal would have established the Agnellis as major players in the fashion industry alongside the Arnaults and Pinaults in France.

Discussions with Armani – which is valued by analysts at about 6 billion euros ($7.09 billion) – did not progress due to the designer’s reluctance to sell, two of the sources said, adding talks were informal and no bank was involved.

A possible deal with Armani would have been crafted through investment firm Exor or Exor-controlled carmaker Ferrari – but Elkann’s latest offer was rejected, the sources said.

“Discussions are dead for now,” one of the sources said.

The move reflects efforts by the founders of Fiat Chrysler – who own 53% of Exor – to expand beyond the car industry and increase their exposure to the luxury market after a series of recent investments.

Exor took a 24% stake in Christian Louboutin in March in a deal that valued the French brand, most famous for its signature red lacquered sole stilettos, at 2.25 billion euros.

In June, it entered a partnership with Hong Kong’s The World-Wide Investment Company to support medium-sized Italian companies focused on high-end consumer goods. Last year, it became the largest shareholder in Chinese luxury group Shang Xia, which was co-founded by France’s Hermes.

“If there is someone who could create a serious competitor to the French conglomerates, it’s Elkann,” said one banker familiar with his strategy.

“He has the money, credibility and family prestige to do that.”

Speculation about succession plans at the fashion house founded in 1975 by Armani, known as King Giorgio, has been heating up.

The brand, which is famous for its elegant suits and evening gowns, is expected to draw interest from French luxury companies LVMH and Kering, sources at the groups told Reuters, although they said Armani did not want to sell to a foreign group.

Armani told U.S. magazine Vogue in April that he could consider joining forces with another Italian company, opening the door to a possible business partner for the first time.

He said the COVID-19 crisis had “made us open our eyes a bit.”

The Milanese fashion house, whose net revenues grew 2.3% to 2.16 billion euros in 2019 after three years of declines, has yet to release its 2020 earnings.

The company is one of Italy’s trophy assets and its valuation – which hovers at about three times its sales – could even hit 8 billion euros, one Milan-based analyst said.

Armani, who has no children, set up a foundation in 2016 that would serve as a succession tool, preventing his business from being bought or broken up after his death.

In June, after showcasing his latest menswear collection, he hinted at succession plans, saying he was preparing his future with his closest aides.