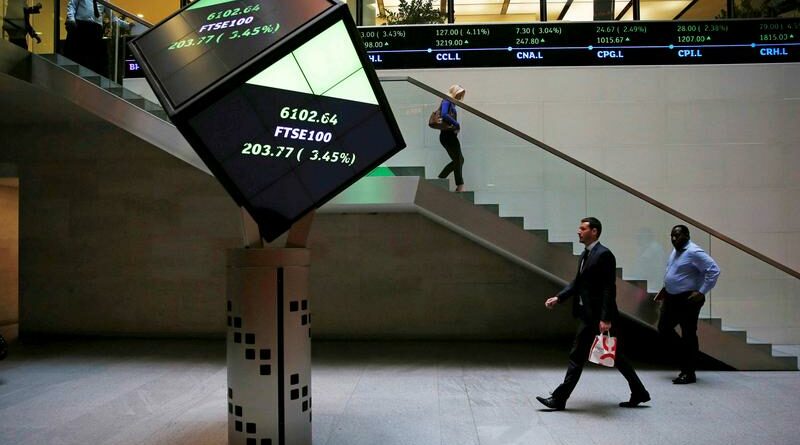 (Reuters) – Miners and bank stocks helped the FTSE 100 rebound on Tuesday after surging coronavirus cases and fears of an economic slowdown pushed the index to a two-month low in the previous session.

After falling as much as 0.25% in afternoon trading, the FTSE 100 sprung back to record its strongest session in more than a week, up 0.5%, with precious metal, base metal miners and banks leading the gains.

“This feels more like a dead cat bounce rather than a healthy rebound as all the arguments behind yesterday’s sell-off remain today” said Russ Mould, investment director at AJ Bell.

Banks jumped 1.1%, after Catherine Mann, a top economist who will soon join the Bank of England’s rate-setting committee, joined interest-rate setter Jonathan Haskel to say cutting stimulus support too early was not the right option.

Two BoE monetary policy members last week said the time might be nearing for the BoE to rein in its huge stimulus programme.

The FTSE 100 has gained 6.4% so far this year helped by record low interest rates. But a jump in inflation above the BoE’s 2% target in May, coupled with risks arising from an increase in local coronavirus infections have slowed the rise of the blue-chip index.

“Inflation is still a major threat and there are plenty of reasons to expect the global economic recovery to slow down,” Mould added.

Among stocks, global miner Anglo American rose 0.7% after it said its production rose by 20% in the second quarter, driven by strong diamond and platinum output.

Carnival Corp gained 3.3% after it said it expected to have resumed cruises with 65% of its total fleet capacity by the end of 2021, betting that concerns over a resurgence in COVID-19 cases will not deter holidaymakers.