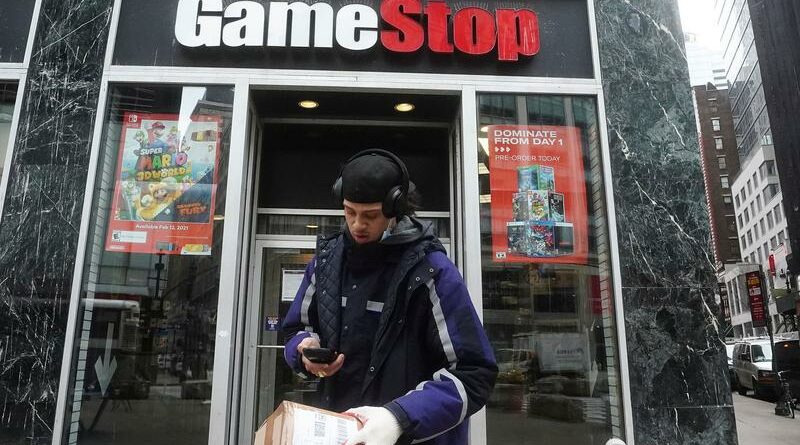 (Reuters) – GameStop shares sank on Thursday as trading platforms including Robinhood and Interactive Brokers restricted trading in the video game retailer along with AMC Entertainment and other stocks that soared this week in a social media-driven trading frenzy that shook stock markets.

GameStop, the video game chain whose 1,700% rally has been at the heart of the slugfest in the past week, lost half its value in early trading. The stock had rallied initially, then retreated, while American Airlines joined the growing list of stocks making stellar gains as small-time traders and major Wall Street institutions broadened their battle.

The retreat in GameStop and other highfliers had little impact on Wall Street, where the S&P 500 was up 2% in afternoon trade.

“Trading platforms are not going to want to stick their necks out and be on the frontline of what they may see as a reckless war, in part, against the elite and the system of Wall Street that’s being democratized by information and the social media. They also don’t want to get involved in a system that has served them for a long time. You are going to see many take conservation positions until the SEC or the Biden Administration clarifies how they are looking.”

“What’s sad in all of this, what’s concerning to me is, why are they not picking companies that have intrinsic fundamental benefits to investors in all this? There are many undervalued solid companies that would benefit investors versus an AMC, despite having an injection of more than $900 million dollars, which still has a very questionable future with COVID and these further variants that may keep people away from theaters for years.”

“GameStop is a side effect of the vaccinations given to the market from policymakers. The headache is GameStop, the chills are some of these things that are happening in the debt markets.”

“This does have implications for the fixed income market, in a variety of forms and fashions. One is that clearly if the equity price goes parabolic – like we’ve seen from some of these names – there’s a bigger market capitalization and the bonds are in theory more covered, particularly with some of these companies – like you saw AMC issue equity. If you can actually issue equity, get cash, you are issuing equity at a ridiculous valuation. This is like Tesla 3.0.”

“The asset management industry is experiencing something of a crisis right now, where you are going to have to start thinking about non-traditional metrics for evaluating a business. Typically, I don’t think most bond managers are interested in the short interest of an equity outside of a handful of names. But now that’s something you might want to pay attention to. Understanding that in our market if you’re short a name through the cash or the CDS, you’re going to have to pay attention to certain things in the equity market that we used to pay less attention to.”

“This is history in the making. When I have uncles and relatives calling me about trading, it’s gone beyond the realms of normal investing.

“A lot of the big houses have all kinds of issues especially since they have restricted trading on some of these short squeeze stocks.

“From the perspective of David and Goliath, a lot of our customers have been actively trading on the short squeeze.

“Obviously someone is going to be left holding the bag. In one respect it’s been a positive, but the whole casino-ization of the stock market is something that concerns me. Often there are knee jerk regulatory actions that may have unintended consequences. The attention is great but the way these stocks have moved has caught the eye of the regulators.

“(The pandemic) ushered in a new wave of investors providing some daily action that people need.

“The new retailer is a semi-sophisticated investor.”

On how it’s affecting the broader market: “Not at all, it’s a sideshow. Because the financial wealth of the country, for right or for wrong, is heavily weighted towards older people who don’t speculate in these types of stocks, so I don’t think it can bring down the stock market.”

Social Security Is Not Going Broke, but I’m Writing It Off Anyway

3 Technology Titans You Can Buy on Sale