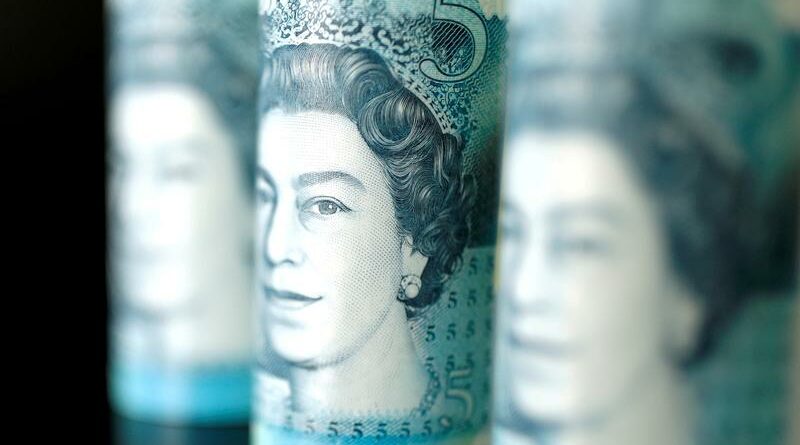 LONDON (Reuters) – Sterling hit a one-month low against the dollar on Monday as a global sell-off prompted by China’s struggling Evergrande hit risk-oriented currencies while uncertainties about the Bank of England’s monetary policy and surging gas prices also weighed.

A sell-off in Asia where the world’s most indebted property developer China’s Evergrande plunged to over 11-year lows spread to Europe with the pan-European STOXX 600 falling 1.90% and London’s FTSE 100 1.55%.

Investors turned to the safe haven of the greenback which firmed to a four-week high, with the dollar index reaching 93.4.

“What we are seeing is all risk currencies taking a hit across the board”, said Jeremy Stretch, head of G10 FX strategy at CIBC Capital Markets.

He added that domestic factors were also at play for the British currency, with the surge in gas prices causing an additional headwind.

Britain is considering offering state-backed loans to energy firms after wholesale gas prices soared, prompting big suppliers to ask for support from the government to cover the cost of taking on customers from companies that have gone bust.

Another headache for traders were the uncertainties linked to what could emerge about the future of monetary policy at the Bank of England meeting on Thursday.

“The market had been expecting a relatively hawkish” tone from the BoE, Stretch said, adding that risks to the economic recovery have been creeping up recently and that investors might reconsider long bets on a strengthening currency.

BoE rate-setters who may be tempted to vote next week for an early end to their COVID-19 stimulus plans are likely to hold off for now, with a slowing economy but surging inflation making for a tricky backdrop.

Last month, Michael Saunders was the only Monetary Policy Committee member to vote for an early end to the British central bank’s purchases of government bonds, on the basis that continued buying risked a more aggressive tightening of monetary policy in future.

Since then, BoE Governor Andrew Bailey revealed that four of the eight MPC members who voted last month – himself included – thought some initial conditions had been met to begin exploring the possibility of raising interest rates.