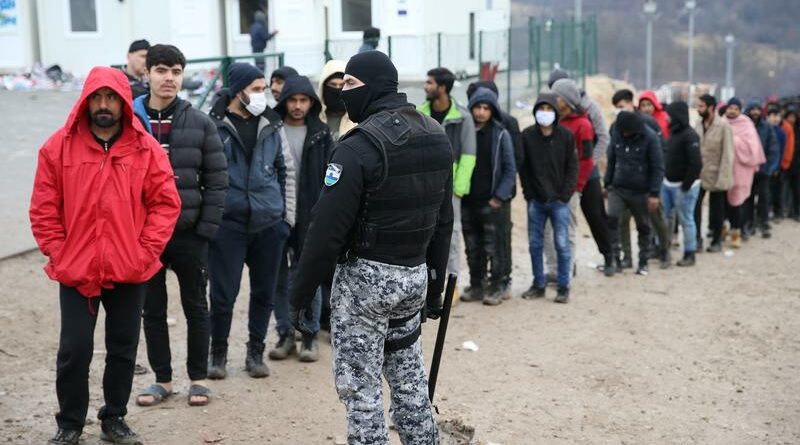 BIHAC, Bosnia (Reuters) – Nearly 3,000 migrants are stranded in northern Bosnia without shelter, the International Organization for Migration said, and some are suffering from respiratory problems and other complications as night-time temperatures plunge.

Some of those sleeping in the open were forced to flee the Lipa camp near the Croatian border two weeks ago when much of it was burned to the ground. A few remain at the facility, relying on makeshift tent structures, while many more have left.

Others have spread out into nearby forests, hoping to cross the border and seek a better life in the European Union, of which Croatia is a member.

“Over the past two weeks, we watched with growing concern the dire humanitarian situation facing many migrants in Bosnia,” said IOM spokesman Paul Dillon.

“IOM and its partners are providing support as best we can, but it’s clear that a sustainable long-term solution must be found.”

Some of the hundreds of people who have remained close to the damaged camp queued up on Tuesday for food being distributed by humanitarian aid groups.

Men huddled around fires made from scraps of wood, while others bathed in a nearby stream, shivering as they tried to dry off.

IOM chief of mission in Bosnia, Peter Van der Auweraert, said there was space for many of the stranded migrants in centres nearby, but it had been difficult to get political agreement from national and local authorities.

Suhret Fazlic, mayor of the northern town of Bihac close to where the camp is located, said his region was taking on a heavy burden which should be shared with other parts of the country.

He also said that funds for supporting migrants had not reached the city.

“The budget of Bihac has not received a euro from any level of authorities in Bosnia and from the European Union, from any other countries, from anybody,” he told Reuters.

“#BiH authorities should behave like an aspiring EU member,” Borrell tweeted on Sunday, referring to the potential future expansion of the bloc to include Bosnia.

According to the IOM, around 70,000 migrants have passed through Bosnia since 2018. Currently some 6,000 are in camps in addition to the nearly 3,000 without accommodation.