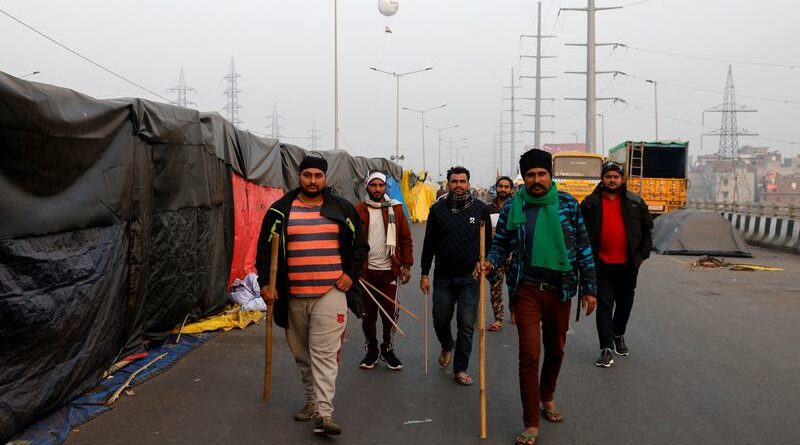 NEW DELHI (Reuters) – Thousands of Indian farmers marched overnight to reinforce protesting colleagues camping out on the outskirts of the capital, New Delhi, to press the government to withdraw three new farm laws that they say will hurt their livelihoods.

In a stand-off between riot police and the farmers, authorities tried to clear a protest site in the city’s east but most farmers refused to move and their leaders said any retreat would constitute surrender.

“Concerned over police high-handedness, thousands of farmers, who were not part of the protest, have now come to bolster our movement,” Rakesh Tikait, president of one of the largest farmers unions, the Bharti Kisan Union, told Reuters on Friday.

Prime Minister Narendra Modi’s government introduced the new agricultural laws in September, triggering a wave of protests and sit-ins on some of the major approaches to New Delhi.

Farm leaders say the laws are an attempt to erode a longstanding mechanism that ensures farmers a minimum support price for their rice and wheat.

The government says the reforms will open up new opportunities for farmers and it says it will not bow to the protesters’ demands.

Modi retains a solid majority in parliament although the protests are beginning to undermine some support for the government in the countryside and play on old loyalties.

Farmer leaders have accused authorities of acting at the behest of politicians affiliated with Modi’s ruling Bharatiya Janata Party.

Union leader Tikait comes from a politically influential farming community in Uttar Pradesh, India’s most populous state in the north. In several villages, members of the dominant Jat community will gather on Friday to support the protest.

The protest turned violent on Tuesday, when India celebrated its Republic Day with a military parade, when some protesters broke away from a procession of tractors to break through barricade and clash with police.

U.S. Job Gains for Next Decade Projected to Much Slower Than After 2008 Crisis